Card subject to change. The WWE Women’s Revolution is almost seven years old and the changes that it has brought have been outstanding for women’s wrestling. After so many years of the wrestlers having almost nothing to do and being little more than an eye candy sideshow, women’s wrestling has become a featured attraction in WWE. One of its bigger stars was missing this weekend though.

According to F4WOnline.com, Raw Women’s Champion Becky Lynch missed this weekend’s WWE live event in Youngstown, Ohio. Lynch was originally scheduled to defend her title in a four way against Bianca Belair, Liv Morgan and Doudrop, with the three challengers facing off in a triple threat in her absence. There is no word on why Lynch missed the show. She appeared on this week’s Monday Night Raw, losing in a six woman tag.

Opinion: This is kind of a confusing situation, but the fact that Lynch was back in the ring the following Monday would suggest that she isn’t hurt in any serious way. There is every possibility that Lynch missed a flight or had some minor issue that isn’t a long term problem. It must be annoying for the fans in attendance, but she is already back in the ring and that is what matters.

What do you think of Lynch? What is next for her title reign? Let us know in the comments below. 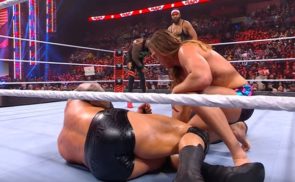