That is never good. Wrestlers are incredibly talented athletes but they are far from perfect. No matter how much training or skills they have, there is always the chance that something could go wrong at any given time. You can see someone get hurt out of nowhere in the middle of a match, and that seems to be the case again this week as a top WWE star may have gotten hurt.

The Street Profits defeated RKBro during this week’s edition of Monday Night Raw when Montez Ford pinned Randy Orton off a frog splash. According to Wrestlingnews.co, Orton may have been injured by the splash, as the match seemed planned to continue with Orton’s foot on the rope, but Angelo Dawkins shoved it away. Orton was seen holding his shoulder after the match. It should be noted that this is still speculation and no injury has been confirmed.

Opinion: This is one of those things that is going to happen at some point, but what matters most is Orton being healthy. He has a long history of shoulder injuries and it would be terrible to see him missing any kind of time again. Orton is one of the most successful stars in the history of WWE and he is much closer to the end of his career than the beginning. Hopefully he can get back in the ring without missing any time because you never want to see someone out of action.

What do you think of Orton? What should he do when he gets back? Let us know in the comments below. 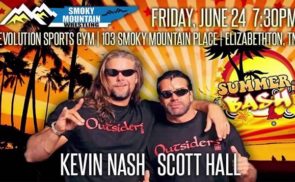