That isn’t good to hear. Wrestlers are larger than life characters who get your attention no matter what they are doing. That can make for some interesting moments, which is exactly what a promotion is hoping they can do. The more interesting these wrestlers are, the better the business is likely to do, but the people are still humans. That means they have problems, and that was the case again recently.

According to Jerry Jarrett’s Facebook page by way of PWInsider.com, WWE Hall of Famer Scott Hall has been hospitalized after breaking his hip in a fall. Jarrett said that he spoke to Hall, who informed him about the incident. Hall is currently scheduled to appear in Dallas for WrestleMania weekend as a guest at WrestleCon though it is not clear if that is still the case following his injury.

Opinion: That is never good to hear and hopefully Hall makes as fast of a recovery as possible. It is a terrible situation and something that could take a good while for him to get better. Hall is someone who has already had a lot of problems over the years and it is a shame to see something else like this happen to him. Unfortunately this seems like something that just happened and that is never good.

What do you think of Hall’s career? What is his best career moment? Let us know in the comments below. 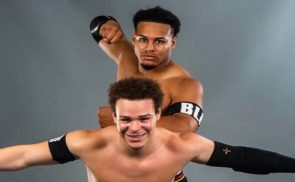 AEW Star Returns To The Ring After Year Long Injury