We are about a month away from Stand & Deliver, which could stand to deliver some of its card this week. You can all but guarantee Bron Breakker defending the NXT Title against Dolph Ziggler, but they are going to need something a little bit better than that. Those two are in a tag match this week so let’s get to it.

Ciampa is in a Breakker style singlet here, which commentary calls Steiner-esque. Roode also comes out to the GLORIOUS theme for a flashback. It’s a brawl in the aisle to start with Ciampa hitting a big slingshot corkscrew dive to take out both of them in the floor. We settle down for the opening bell with Ciampa working on Ziggler and handing it off to Breakker, who gets dropped by Roode’s neckbreaker.

Ziggler grabs a chinlock but Breakker fights up and hands it off to Ciampa to clean house. A double clothesline looks to set up the Fairy Tale Ending but Roode drives him into the corner to escape. Roode’s spinebuster gets two and we take a break. Back with Ciampa getting caught in the wrong corner, setting up a powerbomb/neckbreaker combination for two.

Ciampa fights out of trouble though and the hot tag brings in Breakker to wreck both of them with suplexes. The Steiner efforts continue with Ciampa playing Rick in a Steiner Bulldog for two on Ziggler with Roode having to make the save. Ziggler’s rollup gets two but the Fairy Tale Ending gives Ciampa the pin at 15:03.

LA Knight wants us to call someone and tell us to watch him call out Grayson Waller.

Gunther is ready for Solo Sikoa.

Here is LA Knight for a chat. He goes over his history with Grayson Waller, including some still photos. Cue Waller with Sanga on the platform, with Waller saying everyone sucks and goodbye. Knight shows us a shot of Knight standing over him last week. That was 2-0 for Knight, which is enough for Waller to agree to one more match next week: Last Man Standing. Works for Knight.

Persia Pirotta and Indi Hartwell make sure they are both focused, though Pirotta sneaks off to text someone.

We look back at the first matches of this year’s women’s Dusty Rhodes Tag Team Classic.

Toxic Attraction is watching from the balcony. Choo tries a drop toehold on Pirotta but stops to play peek-a-boo. Pirotta isn’t impressed and takes him into the corner, allowing the tag off to Hartwell. Choo isn’t having that and brings in Kai, for a double whip into the corner. A double faceplant gives Choo two but Hartwell elbows her down.

Hartwell grabs a top wristlock but Choo small packages her and rolls over to Kai for the hot tag. The running kick in the corner rocks Hartwell, who is over for the tag to Pirotta without much trouble. The fireman’s carry faceplant gets two on Kai, who is right back with a pump kick before knocking Pirotta to the floor. Choo, in slippers, goes up for a top rope Vader Bomb, setting up Kai’s top rope double stomp for the pin at 5:24.

Video on the Creed Brothers vs. Imperium, who meet for the Tag Team Titles next week.

This is fallout from Legend blaming Miller for her debut NXT loss. Legend kicks her in the face to start and then bends Miller’s back over her knee. Miller slips out and crawls over to the ropes, allowing her to hit some running kicks of her own. A low superkick sets up a step up moonsault for two on Legend, who pops back to her feet. That means a fireman’s carry slam is enough to finish Miller at 2:56.

Solo Sikoa wants Gunther to respect him and it’s going to be a fight.

Josh Briggs and Brooks Jensen want to ride something all night. Elektra Lopez comes in and doesn’t like it, but they mean a truck instead of a woman, as she seems to think. Lopez says they wouldn’t know how to handle a real woman, but Jensen says he’s never been with a real woman. Jensen: “BOOM! IN YOUR FACE!” Briggs looks stunned as Lopez walks away.

Gunther looks like he has slimmed down a lot. Sikoa gets elbowed in the face to start and a slam puts him down again. Some shots to the face stagger Gunther but he knocks Sikoa silly with a boot to the face. Sikoa’s fireman’s carry is broken up and Gunther blasts him with a clothesline.

The Boston crab goes on for a bit, with Sikoa getting out and slowly striking away. This time the Samoan drop connects to send Gunther outside, setting up a splash from the apron. Back in and Sikoa hits a superkick but the Superfly Splash misses. Gunther’s sleeper is broken up with a jawbreaker but he grabs it again and Sikoa…is planted with a powerbomb. Another powerbomb finishes Sikoa at 7:38.

Dolph Ziggler is annoyed at his loss but he’s still #1 contender. Tommaso Ciampa comes in to say he beat Ziggler so he should be getting that shot. Cue Bron Breakker, who says he’s ready for anyone at Stand & Deliver. Ciampa says he’s beaten Breakker so Breakker says he’ll beat them both. Ziggler is ready for his title shot next week as Breakker and Ciampa stare at each other.

Joe Gacy is ready to let Harland beat up Draco Anthony, but Anthony isn’t the cause of Harland’s anger.

Indi Hartwell and Persia Pirotta are annoyed at their loss but Duke Hudson comes in to console Pirotta. Hartwell can’t get Dexter Lumis to text her back.

Anthony snaps his arm across the top rope to start but gets splashed in the corner for his efforts. Another splash to the back crushes Anthony again but he’s back up with a flying shoulder. Harland slams him face first into the mat to cut Anthony off, setting up the belly to back slam for the pin at 2:29.

Carmelo Hayes, with Trick Williams, is ready for Pete Dunne.

Ivy Nile is training and tells Tatum Paxley to be serious if she wants to be part of the Diamond Mine.

Leon works on Jade’s arm to start so it’s quickly off to Gonzalez. That’s fine with Leon, who brings in Feroz to work on Gonzalez’s arm as well. A sunset bomb does not work for Feroz though, as she gets tossed into the corner. Everything breaks down and Feroz LAUNCHES Leon over the top onto Gonzalez, with Feroz adding her own dive. Back in and Feroz powerslams Jade for two but Jade gets over for the tag to Gonzalez. The Chingona Bomb plants Feroz and Gonzalez plants Jade on top of her for the pin at 4:48.

Sarray shows her sun necklace to a bunch of the women when Tiffany Stratton comes in to call it tacky. Stratton offers one her necklaces but Sarray turns it down, earning herself a beating.

Robert Stone and Bodhi Hayward are here too. Wagner starts fast and knocks him into the corner, setting up the big toss back out of the corner. Chase avoids a shot though and comes back with a knockdown of his own. The CHASE U stomp has Wagner in trouble but Hayward and Stone get into it on the floor. Wagner breaks it up with a punch to Hayward’s eye but Hayward tells Chase to get back in there. That’s what Chase does, and a fireman’s carry neckbreaker (Robert Roode’s Roode Bomb) finishes Chase at 4:05.

Nikkita Lyons is ready to face Lash Legend, perhaps on Lashing Out.

Hayes, with Trick Williams, is defending. They run the ropes to start with neither getting anywhere, so instead it’s an exchange of hard shots to the face until they both go down. Something like the X Plex drops Hayes and we take an early break. Back with Hayes knocking Dunne does again and grabbing a neck crank.

A right hand to the face drops Dunne again but he punches a springboard out of the air. Hayes is fine enough to counter a suplex into a Backstabber for two but Dunne manages a quick Bitter End. The cover takes too long though and Hayes rolls away before Dunne can get on him.

Dunne goes for the fingers but Hayes reverses into the Crossface. Another Bitter end is countered into a suplex into a cutter to put Dunne down again. The top rope ax kick is broken up so Williams tries for a save, only to get his fingers snapped. Hayes shoves Dunne off the top though and finishes with the top rope ax kick to retain at 12:28.

Post match Hayes and Williams brag about the win, with Hayes saying he’s on to Stand & Deliver, where the title will be defended in a ladder match. 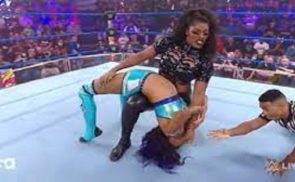 NXT Star Stretchered Out Of Arena After Match