We need somebody new. WWE’s television ratings are in a free fall at the moment and something has to be done about them. There are a few different solutions to the problem but one of them is promoting big matches. One of the easiest ways to do this is by promoting title matches, which can work even better if the fans believe a title change might happen. They might get a chance next week, but from a rather surprising source.

There are so many wrestlers on WWE’s roster that it can be easy to forget who all is there. That can make for some surprising moments if one of those names comes back and gets a big win, especially if it sets up something down the line. A move like that can open some eyes, and WWE is hoping that a surprise win this week makes the audience more interested for next week.

This week on SmackDown, Gran Metalik won a four way match to become the new #1 contender to AJ Styles’ Intercontinental Title. Metalik defeated Lince Dorado, Drew Gulak and Shorty G., earning a title shot on the July 31 SmackDown. The win marks Metalik’s first win in a non-tag team match since the November 20, 2018 205 Live when he defeated TJP in a singles match.

You might not be familiar with Metalik. Check out his in-ring work, plus a little something from Styles:

Opinion: Well I can’t say I saw this one coming. The big surprise factor here helps a lot as WWE is in need of someone new for a spot like this. I can’t imagine Metalik actually wins the title, but at least they’re doing something different here. You can only go so far with the same people getting shots over and over, so why not try something like this and see what they can do?

What are you expecting from the title match? Who will take the title from Styles? Let us know in the comments below. 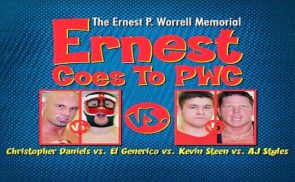