It’s a week before Fyter Fest but things might be shaken up a bit as World Champion Jon Moxley is missing this week due to Coronavirus fears. I’m not sure what that is going to mean for the future but we’ll worry about that if something else develops. I’m not sure what else to expect this week but they have a good enough track record to give me hope. Let’s get to it.

A suplex takes him down and it’s time to rip at the mask a bit. Luchasaurus comes back with a legsweep and the standing moonsault for two before heading up top. Wardlow is right there with him for a top rope superplex for his own two. A knee to the face doesn’t do much to Wardlow, who is right back with a running hurricanrana. That just earns him a Spanish fly and they’re both down.

Wardlow rolls to the ramp and Luchasaurus follows, where he is planted with a powerslam. Jungle Boy tries to interfere and gets throws into the pile of lumberjacks. Stunt dives onto everyone for going after Boy as Wardlow and Luchasaurus fight up the ramp. Brandon Cutler tries to get involved but gets tossed off the stage. Stunt does the same and gets the same result, followed by a Tail Whip to knock Wardlow onto the pile.

Luchasaurus shooting stars onto everyone as JR wonders when someone is going to try to win the match. Back in and Luchasaurus hits a chokeslam but MJF offers a distraction. Jungle Boy spears him through the ropes to the floor, allowing Wardlow to get in a low blow. The F10 finishes Luchasaurus 9:16.

Taz breaks down how Brian Cage does the Drill Claw.

After a rundown of what is to come tonight, Britt Baker sends Tony a note, asking for a diagnosis of Luchasaurus’ green tongue. She also now has a branded Plexiglas case around her special chair.

Non-title and Shida gets in an argument with Penelope Ford on the way to the ring. Ford gets in a slap but the referee won’t let Shida cane her. Running knee and Falcon Arrow finish Velvet at 13 seconds.

Post match Shida goes after Ford and the brawl is on. Shida even knocks down Kip Sabian and they’re finally broken up.

Earlier today, Cody and his entourage had a press conference for his TNT Title defense against Jake Hager. Arn Anderson talks about how Jake Hager wasn’t the right opponent for Cody at the moment but he wanted to fight him anyway. Cody is going to be ready to fight the tough monster. As for Cody, he sees the TNT Title as hope and talks about how he doesn’t like cosplay wrestling. Cody talks about the title not being complete and Hager finally arrives. They pose and who I believe is Hager’s wife throws water in Cody’s face.

Joey Janela and Sonny Kiss stop at a gas station where Joey goes inside to get food. Some guys bother Kiss and try to get in a fight with him, causing Joey, with Lunchables purchased, to come out for the save. They both could get used to this.

Kiss snaps off an early headscissors and handsprings into a slap in the corner. Lee runs him over though and beats up Janela as well. Cabana comes in gets caught in a Hart Attack. Lee breaks up something close to a Muta Lock and the rest of the Dark Order offers a distraction. The confused Cabana adds a splash for two on Kiss and we take a break. Back with Janela getting the hot tag and Death Valley Drivering Cabana.

Kiss and Janela hit moonsaults off the top to take out Lee and Cabana. Back in and Cabana gets hit with a top rope splash from Janela, plus a 450 from Kiss. Lee makes the save but gets sent to the floor. Cabana reverse a Doomsday Device into a victory roll for two so Kiss dives onto the rest of the Dark Order. Lee kicks Kiss in the face but can’t quite catch Janela’s suicide dive. Back in and the discus lariat blasts Janela, allowing Cabana to get the pin at 9:11.

Post match the Dark Order leaves so here’s Lance Archer to jump Janela and Kiss. Jake Roberts says save it for someone more important.

We look at Shawn Spears using a loaded glove to win last night on Dark.

Christopher Daniels and Kazarian for SCU here and it’s Harwood working on Kazarian’s arm to start. Wheeler comes in to stay on the arm and everything breaks down in a hurry. Everyone falls out to the floor and we take a break. Back with Kazarian making the hot tag off to Daniels but Harwood cuts him off and suplexes Daniels onto Kazarian. The slingshot suplex, and a Four Horsemen pose, drop Daniels again. Kazarian grabs Daniels’ hands to block a sunset flip but Wheeler breaks it up. Wheeler keeps going by turning over a small package to give Harwood two.

Back up and Kazarian hits an Unprettier for two on Wheeler but Celebrity Rehab is countered into a catapult to send Daniels into the corner. The Veg O Matic gets two on Daniels but Kazarian is back in for the powerbomb/neckbreaker combination for two on Harwood. Daniels hits a jumping knee to put Harwood on the floor but walks into the Goodnight Express for the pin at 12:33.

Video on Kenny Omega and Hangman Page being oddballs. The Best Friends don’t know how Page and Omega can be best friends when they don’t even drink the same. Omega and Page aren’t best friends, but they’re a great team and that’s what matters. Page: “Them boys are good. I mean, we’re gonna whip their a**, but they’re good.”

Tazz is on commentary as Cage throws Cruz around to start and then curls the guy in his arms. There’s an overhead belly to belly as JR makes sure to get Cruz’s name in in case his family is watching. A toss powerbomb from the ramp to the ring plants Cruz again and the Drill Claw finishes at 1:23.

Post match Taz grabs his mic and asks where Moxley is. He finds him in the camera and yells about how Moxley his hiding at home with some fake excuse. Cage is taking the title at Fyter Fest and is more dangerous than anything Moxley has. Can Moxley stop the path of Cage?

Cabana and Lee are happy with their win as Lee tells him how important it is to bounce back. Lee wants one more chance to show him what it means when they face SCU at Fyter Fest. Colt isn’t sure about that but seems to go along with the idea.

We run down the Fyter Fest card.

Baker sends Schiavone a note about Big Swole putting her in a dumpster for NINE AND A HALF HOURS but Swole is still the biggest piece of trash in AEW> Swole comes in but Baker laughs her off and has an appletini. Baker tells her to go steal someone else’s star power so Swole climbs onto the truck and pours trash onto Baker.

Ortiz is here with Santana and it’s Broken Matt here, complete with Neo1. Santana drives Matt into the corner to start and actually gives us a clean break. As Baker is throwing trash at commentary (much to Tony’s annoyance), Santana gets backdropped to the floor. Matt presses Santana’s head against the post and literally opens his eye before whipping him into the barricade. Back in and Santana gets in a cheap shot and we take a break.

We come back with Santana flipping out of a side Effect and planting Matt with a spinning Rock Bottom. A Lionsault gives Santana two but he misses the frog splash, allowing Matt to send him into all of the buckles. The Side Effect gets one on Santana, with Ortiz shouting that Matt “WANTS YOUR FOOD!”. Another Side Effect gets two but Santana is back with a running Samoan driver. Santana cradles Matt for two but he reverses into a cradle to put Santana away at 10:54.

Here are Orange Cassidy and Chris Jericho for a showdown. Jericho asks why the chicken crossed the road. To get to the other side of course. That’s a joke that people have heard before and while it was amusing at first, it becomes more and more annoying over time. Orange Cassidy is the chicken crossing the road joke and it’s ticking Jericho off.

Jericho has watched some of Cassidy’s stuff and yes there is a unique presentation and like Brian Pillman said, you have to be different to make it in wrestling. Then Cassidy got out of his lane and messed with Le Champion. He better be the best Orange Cassidy he can be at Fyter Fest, and if he tries those kicks to the shin, Jericho will knock him out in thirty seconds. Cassidy better reach into his pockets and pull out a man sized miracle because Jericho is knocking the juice out of him at Fyter Fest. Jericho: “Now that’s a funny joke.”

Cassidy takes the mic, thinks about saying something, and lays it down. Now we get the slow motion shin kicks and the hands in the pockets. Jericho breaks Cassidy’s sunglasses and the fight is on with the two of them heading outside. They go into the stands and slug it out until Jericho swings a camera into his face. Cassidy fights back though and Superman Punches Jericho off a railing through a table to end the show. 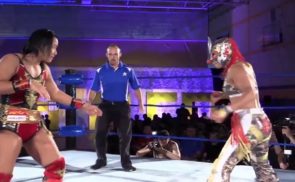 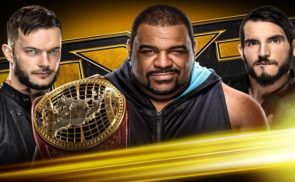