There goes another one. One of the side effects of the SpeakOut movement has been some smaller promotions being devastated if not outright finished off by allegations against their owners/promoters. If the top person in charge of the whole place is in trouble, there is a chance that the promotion is not going to survive. It was the case with Joey Ryan’s Bar Wrestling and now it is the case with another.

The indy wrestling scene has not been this strong in a very long time and that is a very good thing for all of wrestling. Not only can you find some future stars in the making but there are some great things to see in the present as well. There are so many promotions around the country, though unfortunately one of the bigger promotions is not going to be around any longer.

According to PWInsider.com, the Chikara wrestling promotion will be shutting down due to a variety of allegations against owner Mike Quackenbush. These allegations involve various female Chikara wrestlers and staffers. The stories have come up over the last twenty four hours and have led to several wrestlers resigning from the promotion. There has been no formal announcement, but Quackenbush is expected to make one in the near future. Chikara has been around since 2002 and operated in a seasonal setup instead of the traditional permanent schedule.

Effective Immediately I am resigning from CHIKARA. I gave everything I had to the company, and while I do not believe any of the allegations levied are against me personally. I can not in good conscience continue with this company. Thank you for the years of support.

I have officially resigned from CHIKARA. I am greatful for the time I have spent there and the chance to work with some amazing talents. For the time being I am still reachable through this account for anyone who needs to talk, or needs someone to listen.

Effective immediately I am resigning from CHIKARA and The Wrestle Factory. Thank you for all your support in the short time I was apart of the roster, it truly means a lot to me and I love you all for it. ?? https://t.co/yVNI8eTani

I’m just sick. As of now I can not in good conscience remain a part of @CHIKARApro and it’s absolutely breaking my heart. Consider this my resignation as the princess. Don’t know if I will be back on here today. This one really really hurts. ?

Effective immediately I tender my resignation to Chikara. The Wrestle Factory Carolina Dojo will return to being The Carolina Wrestling Academy. I do not condone any actions by the Philadelphia school and will no longer be associated with the brand.

Effective Immediately I am resigning from CHIKARA. I gave everything I had to the company, and while I do not believe any of the allegations levied are against me personally. I can not in good conscience continue with this company. Thank you for the years of support.

Effective 6/23, I have ended my relationship with both CHIKARA and The Wrestle Factory. These places felt like home since my first adventure as a fan in 2008. I appreciate the great people I've met along the way. To those people, we will stay in touch.

I can't emphasize how badly my heart hurts right now.

I've decided to separate myself from CHIKARA.

Please be understanding of others as they process and grieve. This is an especially trying time for all of the members of the family I made there.

There was nothing like it. Check out some of what Chikara was all about:

Opinion: This is one of the horrible things about the situation as the members of the Chikara roster who never did anything wrong are going to be losing work over something someone else did. It isn’t fair and while there are bigger problems in the entire situation, this is another bit of fallout which can harm people who have nothing to do with what caused it in the first place. That is a shame, but it is the kind of thing that is probably going to take place again and again.

How far do you see this going? Will Chikara ever be back? Let us know in the comments below. 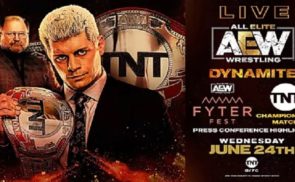