The house cleaning begins. The big story over the last week has been the SpeakOut movement, which has seen countless people, both men and women, come forward to tell their stories of sexual misconduct against both wrestlers and wrestling personalities. Some of these stories have been hard to fathom and now it is time for the fallout, including people being fired for what happened.

One of the most important details of the SpeakOut movement is how it has affected wrestlers and wrestling companies from so many different areas of the wrestling world. Everything from small indies to regional promotions to the WWE has been impacted as it has become clear that this is a very widespread problem throughout the industry. One of the biggest promotions is doing something about it.

Sean Ross Sapp has reported that Impact Wrestling has released Joey Ryan and Dave Crist from the company, as well as suspended Michael Elgin until further notice. All three have been accused of various acts of sexual misconduct, with Ryan facing over a dozen different accusations. This comes on the same day as Ryan’s Bar Wrestling promotion was rumored to have closed. Elgin is currently scheduled to be in the main event of Slammiversary on July 18.

Impact Wrestling has terminated the contracts of Joey Ryan and Dave Crist. Michael Elgin has been suspended pending further review of allegations.

That’s some harsh news. Check out something a little happier from the company:

Opinion: This is the kind of thing that has to happen and there is no way around it. At the end of the day, these moves might hurt the promotion in the short term, but these people do not belong in the wrestling world. Getting rid of them sends a clear message that it will not be tolerated and there is no place for it. I’m not sure how long Elgin will be gone, but at least he is going to be missing some time.

What do you think of the punishments? Did Impact Wrestling handle this well? Let us know in the comments below.

How The Champions Fared On Championship Monday 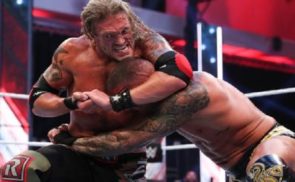