It’s the very final show before Wrestlemania and that means a grand total of nothing this time around as 205 Live has no presence on the show. All that matters here is having a few decent matches between people who aren’t going to be getting any time on any of the major shows. Let’s get to it.

They go technical to start with several switches out of some armbar attempts. Kushida takes it to the mat but Burch grabs the leg to get out. The fight over arm control sets up another standoff as things reset a bit. Kushida takes him down by the leg and cranks on the arm a bit, implying that it wasn’t very hard. Burch’s headlock works a bit better for him until Kushida reverses into a front facelock to continue the frustration.

Burch manages to send him to the apron but Kushida switches places and kicks him outside. Back in and Burch punches him out of the air for two and it’s time to stomp Kushida down. The chinlock goes on for a bit but Kushida knocks him outside for a running knee from the apron. The springboard DDT is broken up though and Kushida pulls him into a Crossface. Believe it or not, Kushida escapes that as well and dropkicks the knee out. The Sakuraba Lock finishes Burch at 10:06.

Gallagher runs him over to start but walks into a dropkick for his efforts. Breeze’s headlock doesn’t work very well so he clotheslines Gallagher for two instead. Now the headlock on the mat works a bit better but Gallagher reverses into one of his own. Some right hands keep Breeze down and a few uppercuts put him in the corner. We hit the armbar for a bit but Breeze is back up with a sunset flip attempt.

Gallagher sits down on him for two (how he beat Breeze in the elimination match) but the Supermodel kick gets the same. Breeze heads up top but gets his arm pulled down onto the top rope. A few cranks on the arm make it worse and the Fujiwara armbar has Breeze crawling over to the rope. Back up and they slug it out until Breeze knees him to the floor. Back in and Gallagher hits a discus elbow for the fast pin at 10:00. 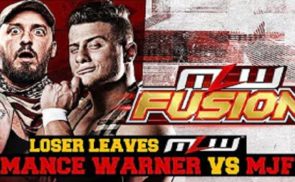