We’re back in time a bit here as it’s the last Main Event before Wrestlemania. I have no idea what that is going to mean this time around but that’s something I say every week on this show. Things have at least been a little different lately and maybe we can get a better show here again. Let’s get to it.

Good Brothers vs. Ever Rise

That would be Chase Parker/Matt Martel (better known as 3.0). Parker slugs away at Gallows to start with as much success as you would expect. Anderson comes in and gets his wrist cranked a bit and it’s off to Martel for a slingshot elbow to the back.

Gallows offers a distraction though and Anderson hammers away to take over on Parker. A fall away slam sends Parker flying and we hit the chinlock. Gallows misses the big boot in the corner though and it’s back to Parker to pick up the pace. That doesn’t go well so it’s a big boot to Martel and the Magic Killer to finish Parker at 5:09.

It’s time for the Firefly Fun House but the lantern seems to get in Bray’s head. Bray says that it already failed against John Cena but He won’t. See, Bray has a way to win so let’s go to the blender. Take some self loathing, rage, disappointment, hot sauce (for flavor) and a carrot (so he can see John Cena)…..plus Ramblin Rabbit (for some completely unnecessary opinions) and throw them all in a blender and mix them together. Bray says He wants Cena to join Cena in the world of insanity in a Firefly Fun House match at Wrestlemania. No word on that means, but Bray wants to be let in.

Here’s Becky for a chat. She beat two champions last year at Wrestlemania and walked out with two titles. Ever since then she has walked a razor blade lifestyle and now who she is if she loses the title. She knows she’s getting in Shayna’s head too though. Shayna has always wanted to be out of Ronda’s shadow and if she wins at Wrestlemania, she can get out of that shadow forever. If she loses though, she’s right back in there for good. Cue Shayna to choke Becky out and then swing her hard into the announcers’ table.

Video on Edge vs. Randy Orton.

The unique Main Event main events continue with Aichner headlocking him to start. Alexander slips out and strikes away but a springboard is broken up. We take a break and come back with Aichner kicking away in the corner and putting on the chinlock. Back up and Aichner misses a running knee in the corner.

A dragon screw legwhip has Aichner in trouble but the Lumbar Check is blocked. Instead Aichner catches him coming off the top and counters into a suplex for two. That doesn’t matter much though as Alexander is right back up with the Neuralizer to finish Aichner off at 10:16.

Video on Undertaker vs. AJ Styles.

Undertaker says that Allen Jones’ (AJ Styles’ real name) mouth is writing checks he can’t cash. AJ has been a big fish in a small pond for most of his career and now he’s saying that fifteen years ago, he wouldn’t have done this. Undertaker lists off a lot of legends from around that time and thinks it was smart of Allen to wait for them to be gone, except for him.

He gets what AJ is doing, but mentioning Michelle McCool is crossing the line. Is it because the Faithbreaker is better than the Styles Clash? Undertaker: “She got it over.” They’ll be in the bone yard and AJ should try him because Undertaker will make him famous. Anderson and Gallows can come too because they can all get hurt and rest in peace. The camera pans back to show an AJ tombstone.

Paul Heyman and Brock Lesnar are in the ring for a chat. Heyman talks about how this is the go home segment on the go home Raw for Wrestlemania. For the better part of twenty years, it has been Brock Lesnar int his spot and that is because he is the beast to slay. This year, Drew McIntyre has stepped up and compared to most people, he is special. Compared to most wrestlers in that locker room, Drew McIntyre is special. So were the Rock, Hulk Hogan, Shane Carwin, Randy Couture and the Undertaker and they all went from special to Brock’s b****.

The Claymore Kick is good but so were the Rock Bottom, the legdrop, the Tombstone and the Attitude Adjustment, because none of them mattered against Brock when it mattered. At Wrestlemania, Brock will survive the Claymore Kick and then next year, Brock will be standing here with the title again because Drew is the latest great story to tell. This year, Drew walks in special and then walks out just like everyone else. 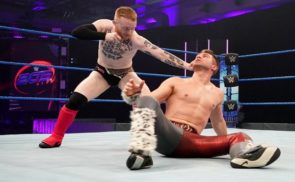