It’s a new season. We are now officially done with WrestleMania 36 and that means things can start changing all over again. That has always been the case with the Monday Night Raw after WrestleMania, though things have not been as big in recent years. WWE has shifted more towards the Superstar Shakeup for the changes, but we are not in a normal era at the moment and things might be changing again.

One of the most interesting things about the Monday Night Raw after WrestleMania is seeing what kinds of debuts and changes you see. Maybe it’s an NXT callup or maybe it’s someone who has not been around for years. Sometimes though it’s someone you have been seeing for a long time and they do something to mix it up. The latter case is true this time around on Monday Night Raw.

This week on Monday Night Raw, Apollo Crews was announced as the newest member of the roster. Crews had been on SmackDown since last year’s Superstar Shakeup, with his most prominent feud being against Sheamus. The move comes to fulfill some draft picks that Monday Night Raw had earned. Crews would go on to lose to Aleister Black in his first match on Monday Night Raw.

Crews can do a lot of impressive things. Check out some of his work:

Opinion: Crews is someone who seems to have all of the potential in the world but he has never quite put it all together. That is the kind of thing that you only have to get right once though so maybe it works this time around. With that many physical gifts, it is easy to see why Crews gets so many chances to show what he can do in the ring. Now if only it can all click.

Will it work for Crews this time around? What do you expect from him? Let us know in the comments below. 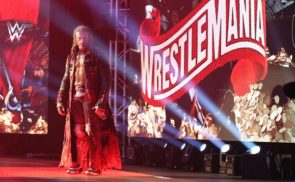