There is a boom in the wrestling industry right now. Competitors from around the world are being signed to promotions, as others make their exits.

Former ROH star ACH made his NXT debut at the NXT live event this Thursday in Largo, FL at the Minnreg Hall. The show saw ACH compete under his real name of Albert Hardie.

During the show, the former ROH star competed against Raul Mendoza in the opening match. Unfortunately for ACH, he came up short in the bout.

If you’re new to ACH, you can check out 55 of his greatest moves in the entertaining video we’ve provided below:

The tweets below showcase the former ROH star in action as he takes on Mendoza:

It was during this same show that WWE Women’s Tag Team Champions The Boss ‘N Hug Connection would clear the ring to make the save for Kairi Sane & Io Shirai after a match involving three teams.

I love ACH. I’m super hyped to see what the former ROH star gets up to. It has been expected that he makes his debut for NXT for some time now, actually. It is nice to see it happen at a live event. I believe Matt Riddle was fairly similar to this.

If you’re in the mood for more news, you can find out the dates WWE has for their Saudi Arabia shows this year by tapping here. Alternatively, if you want to find out which movie star RAW Superstar Nia Jax challenged to a match, you can do so by tapping here. 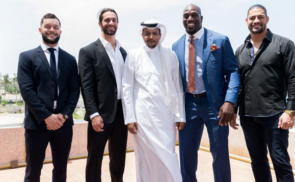