That’s not good for anyone. According to a report from Steven Muehlhausen of DAZN Boxing, there was an altercation between CM Punk and The Young Bucks following the Media Scrum from AEW’s All Out this past weekend.

The report states that The Bucks confronted Punk about his comments at the scrum. The altercation became physical, with Punk throwing punches at least one member of The Bucks. Several people had to intervene to separate everyone.

Sources: There was an altercation between CM Punk and The Young Bucks early Monday. The Bucks confronted Punk about his comments at the scrum. It did get physical with Punk throwing punches at least one member of The Bucks. A number intervened to separate everyone. More 2 come

Punk was less than kind about his feelings on certain topics following the event. He went on a profanity-laced rant on various topics, including Colt Cabana, Hangman Adam Page, The Elite, and their EVP status.

We’ll continue to monitor this story and provide updates as they are available.

Should this surprise anyone? I have not been a fan of Punk’s for years, and even though his run in AEW has been great and given us some great moments, this incident continues to show who he really is. He has absolutely no idea how to conduct himself like a professional, and his inept boss, who has no clue how to run a wrestling promotion, lets it occur as he is sitting right there. AEW is a ton of trouble, and they have no one to blame but themselves. This incident should highlight that not everything is butterflies and rainbows on the other side of the fence. 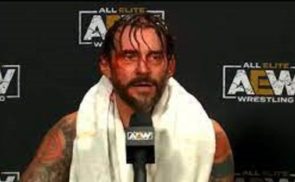