It had been previously reported that WWE is paying Tyson Fury $12 Million to take on Braun Strowman at the upcoming Crown Jewel pay-per-view in Saudi Arabia on October 31. However, reports can be deceiving at times.

According to the latest edition of the Wrestling Observer Newsletter, this figure is incorrect, and Fury is only getting a few million dollars for the bout. The figure came from the fact that Saudi Arabia is willing to pay a great deal of money to get Fury and Cain Velasquez since they can’t get UFC in that country.

Furthermore, Fury’s promoter, Frank Warren, was strongly against him doing WWE, due to the risk of reopening the cut he got in his last fight or suffering a potential shoulder injury. The Gypsy King is scheduled to have a rematch with Deontay Wilder in February 2020.

Strowman is ready to rumble: 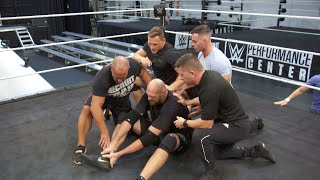 Maybe it’s just because I’m a fan, but I can’t help but think that WWE has more of a mainstream sports presence than UFC or Boxing. The Gypsy King has the opportunity to gain some more exposure on a worldwide stage can only help is brand, and will enhance the upcoming rematch with Wilder next year.

You Can’t Do That. Jon Moxley Being Reprimanded By AEW