Bryan Danielson is widely considered one of the best wrestlers in the world. A lot of people felt that after the CM Punk situation that The American Dragon was the perfect guy to take the AEW World Championship and reestablish its prestige.

There’s a lot in the air and on the rumor mill about his wrestling future, especially in AEW. Bryan Danielson himself just appeared on the latest episode of One Fall with Ron Funches, where he specifically discussed his plans for his wrestling career once his current deal with AEW expires in 2024.

The most significant aspect is that Bryan Danielson would prefer to wrestle “two weeks before he dies.” Objectively, Danielson has no intention of actually retiring from the ring. Danielson just wanted to make it clear that once his current AEW contract expires, he will not be a “full-time” wrestler anymore.

Bryan compared himself to Jerry Lawler or Terry Funk in terms of how they wrestled every once in awhile to scratch the itch until the day comes where they are done. For obvious reasons, his priorities have become his family, especially after his first retirement where he had to adjust and the idea isn’t so impossible anymore.

No matter what happens in the future, Bryan Danielson is under contract with AEW well into 2024. We still have a lot of time left with The American Dragon. Honestly, the concept of Danielson being able to wrestle anywhere he wants on a weekly basis could be one of the most innovative free agent moves in wrestling history.

On paper, he could have the freedom to take WWE events while also doing AEW part-time. Bryan could work in New Japan whenever he wanted. When asked about his vision for a retirement match or a last stand, he had this to say:

“I don’t have any vision of what I want my last match to be, Bryan Danielson explained. “In my mind, it would be a match that I would just be doing at some local indie in front of 300 people that are just like, ‘Okay, I’m just going out and having some fun and it just turns out to be my last match’ [he laughed]. That’s kind of how I envision it.” 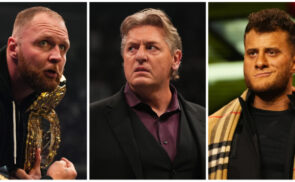