Saraya made her return to the squared circle at AEW Full Gear on Saturday. She defeated Britt Baker in her return match that lasted about 12 and a half minutes. During the post-event media scrum, Saraya addressed the status of her neck after the match with Britt.

In a nutshell, she said that her neck “feels great” and that the extensive tests that AEW performed confirmed her neck is 100 percent healthy. That was a surprise even to her, but Saraya also revealed the details of her training schedule as well. Watch the full video below to hear everything Saraya had to say after AEW Full Gear.

WrestlingRumors reported that Tony Khan didn’t care if Saraya would be able to wrestle to not in AEW. As they explained above, the process was slow to confirm that she was healthy to wrestle. However, there were other plans in place if Saraya could perform as an in-ring talent.

Neither Saraya or Tony Khan specifically addressed how often she will be wrestling. All indications are suggesting that we could see her next match as early as Dynamite on Wednesday. It’s unclear if the feud with Britt Baker is expected to continue for the rest of the year. The plan could be to push Saraya as the next challenger for new AEW Women’s Champion Jaime Hayter or even Jade Cargill.

Saraya sat down with Chris Van Vilet for his podcast to discuss her comeback ahead of Full Gear. During the podcast, she mentioned that Sasha Banks was one of the first phone calls that she made once she was officially cleared.

Here’s exactly what Saraya had to say about a potential match between herself and Sasha Banks:

Aside from the personal history between the two women, the matchup is one we never saw properly when both were in WWE. They both never really crossed paths on NXT and never had the big WWE PPV match together. There’s a lot of potential for both women to have another big moment in AEW. Unfortunately, this is likely going to be nothing but speculation with Sasha’s WWE status.

AEW has a potential babyface star in Saraya being back. Her story is as inspirational as it gets (they even made a movie about it). It’s good to have her back, but now the question is what she’ll be doing next. We’re not going to have to wait long for Saraya’s next move. 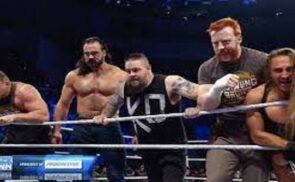 “A Career Highlight For Me”: WWE Star Thanks Fans For Special Moment