We are on the way to Survivor Series and for once there was something a little different here last week. Granted it was just a six man tag but after the months of the same formula, a little change was nice to see. There is no reason to believe that will stick this week, but at least they made things better once. Let’s get to it.

The rest of Chase U is here with Hail and this is Palmer’s debut. Palmer even shakes hands with Chase U to start so she seems rather nice. They fight over arm control to start, with Hail getting the better of things off an armbar. A springboard wristdrag keeps Palmer in trouble before we get the armbar sequel. Back up and Palmer flips her over to set up a standoff in a bit of a surprise. Palmer manages to grab an abdominal stretch, which Hail breaks away from to start the comeback. A neckbreaker spun into a faceplant gives Hail the pin at 4:41.

Result: Thea Hail b. Dani Palmer – Neckbreaker into a facpelant (4:41)

Oba Femi, a rather large man from Nigeria and the University of Alabama is ready for his debut and wants to make his family proud.

Commentary talks about Femi’s power records at the Performance Center so he seems to have something behind him. Femi powers Chen to the ropes to start but can’t get out of a headlock. An uppercut drops Chen and Femi launches him into the corner, setting up a one armed sideslam for two.

The bearhug goes on, followed by another uppercut for another two, and a second bearhug as Femi doesn’t have the most varied offense so far. Chen manages to power out of the bearhug and Femi misses an elbow. A missed charge into the corner doesn’t do much for Chen, who is right back with a top rope chop to the head for two. The double chop finishes Femi at 5:33.

Tony D’Angelo is on commentary. Stacks takes him down by the arm to start but Mensah comes up and cranks away on the arm right back. Some armdrags have Stacks bailing to the floor, followed by a running crotch attack on the ropes. Back in and Stacks takes him down before going after the arm, including a Fujiwara armbar.

Mensah slips out so Stacks grabs another armbar. That one is broken up as well and Mensah strikes away, setting up a springboard missile dropkick. D’Angelo offers a distraction though, including a crutch shot to the neck. A running knee to the back of the head (basically a Stomp with the knee) finishes Mensah at 5:40.

Results
Thea Hail b. Dani Palmer – Neckbreaker into a faceplant
Dante Chen b. Oba Femi – Double chop
Stacks b. Oro Mensah – Running knee to the back of the head 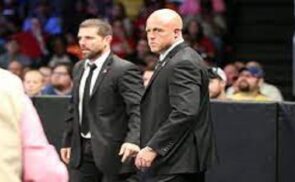