We are just over a month away from Wrestlemania and it would be nice to have the show actually get some more matches announced. There are only a handful of things set for the card and WWE is running out of shows to build them up. Maybe they can put some of them together tonight, as they kind of need to. Let’s get to it.

Here is Kevin Owens, in a sideways cowboy hat, to open with the Kevin Owens Show. He brings out his best friend and his tag team partner, Seth Rollins, to talk about how they’re going to win the Raw Tag Team Titles next week. Owens talks about how he can’t stand Texas but they have to find a way to get to Wrestlemania. Therefore they are going to win the titles next week and defend them at Wrestlemania, which will take place in that stupid Texas.

Owens stomps on the hat but for now, we need to bring out this week’s guests: the Raw Tag Team Champions, Alpha Academy. After assuring them that Otis’ chair is reinforced, Owens and Rollins promise to take the titles next week. Gable brags about his education and, after complaining about how they only have a 33.3% change of retaining the titles, starts shooshing both of them (just like their new SHOOOSH shirts suggest). This sets up a SHOOSH off between Gable and Owens until a Stunner leaves Gable laying and we take a break.

Non-title with Gable still down and we’re joined in progress with Otis elbowing Owens in the face. Gable gets on the apron as Rollins comes in to take Otis into the corner, only to be sent to the apron. A Gable distraction lets Otis knock Rollins off the apron and some whip send Rollins into the barricade.

Back in and Otis hits a suplex to drop Rollins but a missed shot allows the tag back to Owens. Everything breaks down and Owens hits a splash off the apron on Rollins, only to get run over by Otis as we take a break. We come back with Gable working on Owens’ knee before rolling some German suplexes. An enziguri rocks Gable though and it’s Rollins coming back in to pick up the pace.

A Sling Blade hits Gable and a Downward Spiral into the middle buckle makes it worse. There’s the Falcon Arrow for two more and Rollins nods after the kickout. It’s back to Owens for the fisherman’s buster onto the knee but Otis breaks it up. Otis’ Vader Bomb sets up a moonsault from Gable with Rollins making the save. Rollins dives onto Otis to take him out and dives back in for a pop up Buckle Bomb. A Stunner sets up a Stomp to give Rollins the pin on Gable at 12:41.

Omos says he has dominated everyone since he debuted last year at Wrestlemania and he’ll do it again here.

Omos jumps him before the bell and knocks him off the apron for a crash. T-Bar is mostly out of it so Omos throws him into the corner, where T-Bar says he can go. Omos misses a charge into the corner but is fine enough to knock T-bar sillier with a clothesline. The chokebomb finishes T-Bar at 42 seconds.

We look back at Becky Lynch and Bianca Belair yelling at each other last week, setting up Belair beating Doudrop.

Nikki Ash and Doudrop are ready to be the hero/villain in their six woman tag this week. Becky Lynch comes in to say she’s ready to win, like she did over Belair at Summerslam in 26 seconds.

Becky and Liv start but since Belair comes in, Becky hands it off to Nikki. That means it’s back to Liv, who actually locks up with Nikki and takes her down with a running hurricanrana. Everything breaks down early and the villains are sent to the floor as we take a break. Back with Becky rolling Belair up for two and sending her to the apron for a springboard kick to the face.

Becky uses the hair to pull Belair into the post and then ties it around the top rope. With that untied, Doudrop comes in to drop an elbow but Nikki misses a shot, allowing the hot tag back to Rhea. Becky gets faceplanted for two with Doudrop hitting a splash for the save. Everything breaks down and Nikki drags the crushed Becky back to the corner for the tag. Belair comes in as well as everything breaks down, with Liv hitting a dive to the floor.

Nikki high crossbodies Rhea but Belair is back in with a spinebuster. Becky grabs the braid to break that up but Belair WHIPS THE FIRE OUT OF HER with the braid, complete with some crazy cracking sounds. Becky runs off while holding her ribs, leaving Belair to KOD Nikki for the pin at 12:11.

We look at Robert Roode costing Tommaso Ciampa the #1 contendership to the NXT Title.

Dolph Ziggler is here with Roode. Ciampa’s No One Will Survive theme has been replaced with a generic rock song/Ciampa starts fast but misses a running knee to Roode, who counters the Fairy Tale Ending and rolls him up for two. Another running knee connects to knock Ziggler off the apron and a rollup finishes Roode at 2:40.

Post match Roode and Ziggler beat Ciampa down, with Ziggler promising to take out Ciampa and Bron Breakker tomorrow on NXT.

We look at Dana Brooke losing and regaining the 24/7 Title.

The women start with Tamina being sent into the corner for the handspring elbow. Reggie comes in to roll Tozawa up for two and a dropkick gets the same with Tamina making the save. Everything breaks down and Reggie’s running flipping seated senton finishes Tozawa at 1:44.

Post match Brooke kisses Reggie to the mat and Reggie seems pleased. Tozawa puckers up for Tamina, who kisses him as well. Tozawa looks like he is in a trance.

The Street Profits are ready to take out RKBro tonight. They throw in some mocking of the rest of the tag division for a bonus.

Before the match, the Mysterios promise to take out Miz and Logan Paul at Wrestlemania but tonight they’re focused on the Hurt Business. Cue the Miz to list off his WWE accomplishments before bragging about how great Logan Paul really is. They’re big global stars and they are AWESOME, certainly better than the Mysterios.

We take a break and come back joined in progress with Benjamin sending Rey tot he apron for a Downward Spiral from Alexander. Back in and Rey fights out of the corner before hurricanranaing Alexander into the same corner. The diving tag brings in Dominik, who comes in off the top with a high crossbody to Shelton. A suplex drops Dominik but he’s back with a tornado DDT, bringing Alexander back in for the save. Dominik sends Shelton outside but his suicide dive is countered. That earns Benjamin a posting but Miz pops up to grab Dominik. Rey chases Miz off, leaving Dominik to get rolled up for the pin at 4:30.

Riddle is coloring to stay focused when Randy Orton comes in to say they’re going to go win tonight. Then next week, they’re getting their Tag Team Titles back.

Carmella and Queen Zelina are in the back, with Carmella saying she and Corey Graves are going to put on a show after she and Zelina retain the Women’s Tag Team Titles at Wrestlemania.

Riddle pulls Ford into an early triangle choke, which is enough to set up the Orton circle stomp, much to the fans’ approval. Dawkins comes in and is sent outside for a springboard Floating Bro from Riddle, who is taken down by Ford’s big flip dive as we take a break. Back with Riddle fighting out of trouble and bringing Orton back in for the hanging DDT to Ford.

Everything breaks down and Dawkins knocks Riddle to the floor, leaving Orton to have the RKO blocked. Ford enziguris Orton and hits the frog splash…..for the pin at 6:40, as Orton seemed like he couldn’t get the foot on the ropes. That really didn’t seem to be the planned finish, which was either Orton being out of position or hurt, as the referee and Riddle immediately checked on him and then talked to the Profits.

Austin Theory is in Vince McMahon’s office and talks about Vince’s appearance on the Pat McAfee Show. It will be Vince’s first sitdown interview in twenty years, but Theory thinks McAfee might jump him. Vince says it’s not that kind of a show and leaves. Theory picks up Vince’s pencil and says it could be.

Balor is challenging and we have had two breaks, the Smackdown Breakdown and the Vince/Theory segment since his entrance. Priest elbows Balor in the face to start and grabs a reverse chinlock. We hit the chinlock to keep Balor down for a bit, only to have him fight up and send Priest outside. The big flip dive drops Priest and we take a break.

Back with Balor scoring with the Pele to put Priest on his knee, setting up the double stomp. The shotgun dropkick sets up a missed Coup de Grace, allowing Priest to clothesline him down. Priest’s spinning kick to the head sets up the South of Heaven chokeslam for two. The Reckoning is loaded up but Balor slips out and this another shotgun dropkick. Now the Coup de Grace can connect for the pin and the title at 10:36.

Post match Priest says the people carried Balor to winning the US Title. They never gave him that reaction during his title reign, so Priest is going to win that title back and all that motivation isn’t going to mean a thing. Priest clothesline him down and hits a Razor’s Edge onto (not through) the announcers’ table.

We look back at Edge’s Wrestlemania challenge.

Here is Edge to get an answer to his challenge. Edge wants someone to come out and accept so here is….AJ Styles, much to Edge’s delight. Styles gets in the ring and says he accepts, with Edge talking about how both of them have wanted this match for a long time. Edge wants the bulldog AJ and not the one who has been Omos’ tag team b**** for the last few years.

Styles doesn’t like that and the fight is on, with the Phoenomenal Forearm missing. Instead Edge kicks him low and gives that evil face of his. Edge hammers away and goes to leave but stops and comes back. The Conchairto crushes AJ’s head and Edge looks like he’s about to cry…before hitting another one to end the show.

Go For The Gold: Here’s Another Likely WrestleMania Title Match 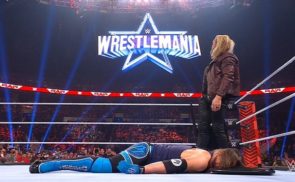