They have a plan for that. WWE does a lot of things throughout their television shows and some of them are more than a bit strange to see. It seems that occasionally you will see something come out of nowhere, even if it does not make the most sense. Most of the time there is at least some kind of an explanation though, and that is the case again with a new WWE arrival.

This week on SmackDown, Kofi Kingston and Big E. came to the ring on an ATV, which Kingston had given to Big E. as an early birthday present. According to Fightful Select, the two rode the ATV as a way to promote an upcoming Mattel toy which will feature the ATV and at least one of them in some way. There is no word on how long the two will use the ATV as part of their entrance.

Opinion: That doesn’t surprise me in the slightest, even if it might not be the most interesting idea. Big E. riding an ATV is hardly some terrible idea, but at least there is something to tie it into later on. I can’t imagine this turns into anything special but odds are it will be there at WrestleMania. I’m not sure how big of an impact this is going to have, though I have at least heard worse ideas.

What did you think of the idea? What is your favorite wrestling entrance vehicle? Let us know in the comments below. 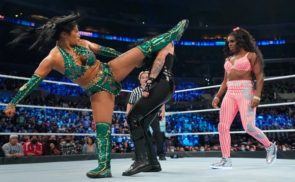