His opinion matters. There are a lot of people who help keep WWE running on a day to day basis, but there is only one Vince McMahon. Despite some of the issues that some may have with him, there is no denying the fact that McMahon is the most powerful person in all of wrestling. If he likes someone in WWE, they could be set for a long time to come. That is kind of the case again with a potential breakout star.

WWE has brought a variety of different wrestlers to its main rosters in recent weeks and that is the kind of thing that can change a lot about the way the company operates. Some of the wrestlers are more successful than others, but if the wrestler has the ability to make McMahon care about them, their chances get that much better. It seems another new wrestler is having some luck.

According to Wrestling Observer Radio, McMahon finds Riddle funny in a special way. While McMahon does not entirely understand the Bro character, he does like how it winds up going in the end. McMahon is not likely to make Riddle a main event player, but he is likely to keep Riddle on television regularly. Riddle has been dealing with United States Champion Bobby Lashley in recent weeks.

Riddle is, uh, different. Check out some of his unique style:

Opinion: Part of the problems with this idea is that it seems to be something that comes up every now and then. If there is one thing that McMahon does not have on his side, it is consistency when it comes to being high on various wrestlers. He may very well be a Riddle fan at the moment, but there is no guarantee that he will be just a few days from now, which makes this a temporarily positive situation at best.

What do you think of Riddle? How far can he go in WWE? Let us know in the comments below. 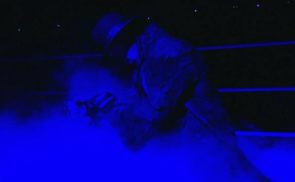