It’s time for the big patriotic show, which is actually taking place closer to Thanksgiving this time around instead of the usual Christmas season. This one is airing on FOX to make it feel even bigger, though it is just a one hour edition which was taped last month at Smackdown. In other words, they don’t seem to be putting in as much effort this year. Let’s get to it.

Video on the troops and what this show means to WWE.

Non-title and commentary does give a brief recap of their history. Robert Roode is here with Ziggler and dig those red, white and blue ropes. Big E. powers out of a waistlock to start and sends Ziggler flying, setting up some gyrations. A kick to the ribs slows Big E. down and Ziggler gyrates a bit as well. That just earns him the abdominal stretch with rhythmic shots to the ribs (I guess that’s better than the spanking. Maybe?), setting up the apron splash. Ziggler is back up with a superkick off the apron though and we take a break.

Back with Big E. powering out of the sleeper and hitting some suplexes. There’s the Warrior Splash but the spear through the ropes is cut off. Ziggler hits the Fameasser for two and the Zig Zag connects for the same. Big E. pulls him out of the air though and the Big Ending is good for the pin at 7:57.

Post match Roode jumps Big E. and gets taken out as well.

We hear about a Marine who have learned some new skills and trains a lot. She has even been named Marine of the Quarter.

We look at some of the previous Tribute to the Troops specials.

We hear about a Marine from Brazil who moved to America to be in the military like his father.

They fight over arm control to start until Belair headlocks her down. That’s broken up with a headscissors as they’re certainly staying basic to start. Fast mind you, but basic. Back up and Belair flips over Morgan, setting up that little dance she does. A running hurricanrana sends Belair into the corner and now she knows she might have to work a bit. Morgan smiles at her and we take a break.

Back with Belair hitting a spinebuster for two but getting caught in a sunset flip for the same. A loud enziguri puts Belair down with Morgan needing a breather before following up. Morgan’s middle rope hurricanrana is countered with a drop onto the turnbuckle though, setting up KOD for the pin at 6:45.

Video on a former member of the Navy who recently retired and is now trying to lead a regular life.

Non-title with Paul Heyman and Rick Boogs as the seconds. Reigns’ look of disgust at McAfee’s dance during Nakamura’s entrance is great. Reigns powers Nakamura down to start and they trade some headlocks. Nakamura tapes him down and drops a knee to the throat (or larynx according to McAfee), setting up Good Vibrations. Reigns knocks him into the corner though and starts firing off the clotheslines. We take a break and come back with….another look at the past Tributes to the Troops and a video on a student at West Point.

We’re back to the actual match nearly three minutes after the show came back on the air, as this show continues to be weird. Reigns plants Nakamura with a release Rock Bottom for two and putting on the golden gauntlet. Hold on though as Boogs busts out the guitar solo to break up the Superman Punch. The distraction lets Nakamura hit the spinwheel kick to the face but here are the Usos to jump Boogs. The distraction lets Reigns hit a Superman Punch off the steps and the spear is good for the pin at 9:14.

The Bloodline poses to end the show. 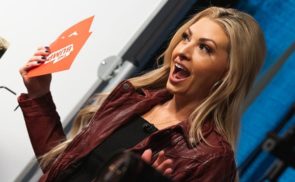 Monday Night Raw Might Be Getting Two New NXT Callups