Ouch. There are all kinds of ways for a wrestler to be put on the shelf with an injury. It might be something that has built up over time and has to be corrected but there are also times when an injury pops up out of nowhere. Both are equally bad, but the latter can stop someone’s push cold. Unfortunately that seems to be the case again, as a top independent star may have been injured.

NWA World Champion Matt Cardona revealed that he was injured during a match at GCW’s Downward Spiral event. The injury took place during a match against Black Christian though it is not clear when it happened during the match. Cardona tweeted that he thought he tore his bicep and was forced to miss his own after party as he flew to Orlando to get his arm looked at. There is no word on how long Cardona could be out, though he is scheduled to defend the NWA World Title against Nick Aldis on June 11.

I think I tore my bicep and I still finished the match and beat you!!! https://t.co/PWzrCryEV6

Sorry guys. Gotta miss this after party at @NerdBarLV. Messed up my arm at GCW tonight and I need to get a red eye to Orlando to get it checked out. pic.twitter.com/tFgFRARlEE

Opinion: This is the kind of thing you never want to see and hopefully Cardona’s situation is not as bad as it seems. Cardona has been on a role with his heel belt collector run and it would be a shame to see that taken away from him. It is rare enough to see someone get on this kind of a run and now it might be going away for a very long time. Maybe he can get through his title defense instead of having the title vacated, but it is rough to see no matter what.

What do you think of Cardona? What will happen to the NWA World Title if he is injured? Let us know in the comments below.

AEW Double Or Nothing 2022 Preview, Predictions And Thoughts 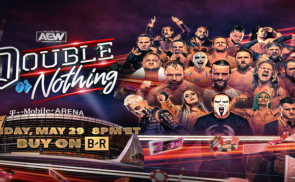 AEW Double Or Nothing 2022 Live Coverage And Results