Welcome back. There are a lot of people on the WWE roster and some of them get to stand out more than others. You can often tell when WWE is interested in pushing someone at a high level and that can make for some interesting moments. It can be interesting to see how the company puts together a push for the person and now we might be seeing that again next week.

On the May 13 SmackDown, Happy Corbin attacked Madcap Moss and Pillmanized his throat with a chair. Moss has not appeared on WWE TV since, but his return was announced this week on SmackDown. WWE announced that Moss will be returning next week, with Moss including a tweet saying that he was coming back with no jokes or cap but rather to beat up Corbin. This comes after rumors of Moss being repackaged into a different look, though there is no word on how much of a change there could be.

You spit in the face of Andre’s legacy. You tried to end my career. But you didn’t – cuz Madcap is built different. Corbin, get ready to see a side of me you’ve never seen before

No jokes. No cap. Next week on #SmackDown I’m coming to WHOOP YOUR ASS

Opinion: This is something that needed to happen if WWE wanted Moss to be pushed as someone serious. Moss is someone with a good look and some talent, but he is going to have to do something different or he will never be able to move up the card. The Madcap thing is fine enough for the lower card, but a change could do quite a bit of good for him. I’m curious to see how it goes as WWE could certainly use a new star moving up the card.

What do you think of Moss? How far an he go in WWE? Let us know in the comments below. 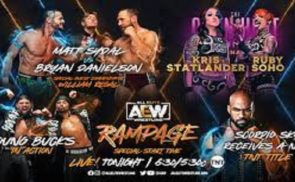