It’s that time of year again. WWE has a long history of pay per views and it is time for one of the biggest on the calendar. This Sunday, WWE will present Summerslam from the Thunder Dome in Orlando, which could make things a lot better or a lot more headache inducing, depending on your taste and eyesight. I’m not entirely sold on this one but Summerslam has the ability to surprise you. Let’s get to it.

Let’s get this one out of the way before I fall asleep thinking about it. This is the next step in a feud that has gone on for months and feels like it has gone on for years. I’m not sure what WWE sees in this but maybe now that Rey Mysterio has signed a new contract, we can wrap it up and let them get on to something more interesting. It isn’t the worst feud, but I can’t bring myself to care about it whatsoever.

I don’t see a reason for Dominik to win in his debut against a name like Rollins, so I’ll go with Rollins to win here. Rey will be there and the match is a street fight to even things out a bit, but I’m not sure how good the match can be. The biggest problem is that I don’t care enough to get interested and that is going to be a problem with such a big match on this stage.

This is the match where they included another illegal action to set the story up, but in this case the poisoning (yes poisoning) was dropped for the sake of….well maybe better taste. The Street Profits have held the titles for about six months now, which is the longest reign since the New Day’s record reign by a wide margin. That would suggest it is about time to finish and it might be the case here.

It wasn’t that long ago:

US Title: Apollo Crews(c) vs. MVP

This is another feud that has been going on for a little while now but this time around they have me wondering where things are going to go. The interesting thing for me here is that it doesn’t seem to be the final blowoff of the whole story. Instead it seems that we are setting up Bobby Lashley as the final boss for Crews, which unfortunately doesn’t exactly leave this as the biggest mystery.

As you might have guessed, I’m taking Crews to retain here. Crews has gotten something out of this title reign, including an improvement in his promo skills. I could go for some more of him as champion, but I’m not sure where he goes after the title reign. It gets to continue here though, as MVP isn’t someone who needs to be US Champion again at this point in his career.

We need to get to some Smackdown stuff on here and that’s where this one comes in. I was really curious to see how they were going to have the hair vs. hair match play out, but now things have changed to a No DQ, Loser Leaves WWE match. It wouldn’t surprise me to see this be due to some real life issues and now I’m not sure how much drama there is with the match.

This just got serious:

In theory, this is a pretty big layup with Rose winning so Deville can go deal with the fact that someone wanted to murder her a few days ago. I can’t bring myself to complain about this one of course, as that’s about as serious as you can get. It is kind of a shame though as Deville has turned into one of the best characters, especially with her talking, in all of WWE’s women’s division as of late. I’m sure she’ll be back, but it’s a shame that her roll slowed down for now.

Now we begin our fairly strange two part portion of the evening, with Asuka getting a pair of singles title shows. There are a few different combinations for this and she gets Bayley to start things off. I’m not sure what to expect this time around, but Bayley has been losing more than she should be as of late. That doesn’t bode well for her, but WWE can be a strange place in something like this.

You may be noticing a theme with this show:

I’ll take Asuka to win the title here, as they seem to be moving towards turning the tables with Bayley and Sasha Banks. In this case that would mean Banks succeeding where Bayley doesn’t and that could make for something interesting as we move forward. Bayley has to lose the title here though and Asuka taking it would certainly be something that would work, even if it is another blow to the Raw women’s division.

So that leaves us with this, because for some reason this is the kind of idea that WWE loves to run with as of late. There is some kind of an idea about having a small number of people dominating a division and the women’s division is getting that condition now. It is Asuka, Bayley and Banks at the moment, but the question is whether Banks leaves this show with a title of her own.

Ok this is getting ridiculous:

I’m going to say that she does, and that means I’m likely to be wrong as there is little reason to believe that Bayley vs. Banks is EVER going to take place at this point. Fifty years from now our grandchildren are going to be waiting on them to fight in their retirement community and odds are it’s going to be any month now. Have I mentioned I’m tired of hearing about that feud being any day now?

This is now Falls Count Anywhere and hopefully that means they can wrap it up sooner rather than later. I know the Fiend might not be the best choice for World Champion but MY GOODNESS he is better than Strowman. I don’t know how much more of Strowman I can take at this point as the guy is one of the least interesting champions in recent or long term memory. I’m not sure why we need to see it last this time, but hopefully it finishes here.

It could get violent:

In other words, for the love of all things good and holy, PLEASE let the Fiend win here. There is no need for Strowman to stick around here and I really don’t want to see them have a fourth match here because there is no need for any of this to continue again. It has been downright horrible and they need to just drop the whole thing with Fiend ending Strowman. Say by beating him with bowling pins and serving him as sandwiches at a James Bond themed dinner party.

And then we have this, which is one of the most interesting things on the card. I’m not sure what this is going to bring, but sweet goodness it actually feels like they have set up something where you could see either guy could win and be ok with it. However there is one thing that I think is hanging over the whole match and it is going to play into the ending: the show’s tagline of “You’ll Never See It Coming.”

My guess is that comes into play here with one of two ideas, and both of them end with Orton winning the title. First up, Retribution could cost McIntyre the title after he called them out on Raw earlier this week. That could set up him getting some payback at Payback, either against Orton or part of Retribution. The other, and more likely option? Flair was never Punted (remember the lights flickered) and you’ll never see it coming when he shows up to help Orton win the title. Either way, the tagline doesn’t exactly help that they’re basically telegraphing a surprise, thereby negating the concept of a SURPRISE.

Call me crazy, but I think we might be in for a decent show here. I know the TV hasn’t been great for the last few months, but there is something about this card that is giving me hope. Summerslam has been going fairly well over most of the last few years and if they can keep that trend going, maybe they can go somewhere. I mean I don’t believe they will, but you have to have some hope somewhere. Maybe they can have some good TV as a result. You would never see that coming would you? 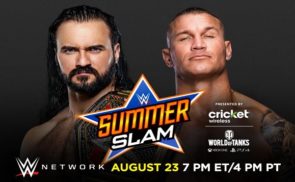