We have less than two weeks to go before the Royal Rumble and that means it is time to finalize everything else for the show. That can take some effort and hopefully we will be seeing some of it tonight. Odds are a lot of the focus is going to be on Roman Reigns vs. Seth Rollins so let’s get to it.

We open with a recap of last week’s showdown between Seth Rollins and Roman Reigns, with Rollins having to bail from the Usos.

Here are the Usos to get things going. They are here to acknowledge Roman Reigns, who is now the longest reigning Universal Champion in history. This brings out Reigns, who takes his time getting to the ring. Reigns holds out his hand for Jimmy, who puts the microphone in his hand. After telling Nashville to acknowledge him, we get a highlight package on Reigns’ title reign, including his major title defenses and a count of his days as champion.

Before Reigns can say anything, here is Seth Rollins to interrupt (McAfee: “You son of a b****.”). Rollins says that was a nice video, but now it’s time to end the show. Reigns had to send his cousins to Raw to attack him but all Reigns had to do was give him a call because he has Rollins’ number. Instead, we need to celebrate the Usos, because they hold up Reigns’ title, “just like me and Mox did in the Shield.” Reigns: “Did John Cena write that promo for you?”

Reigns says their match will be one on one, but Rollins wants to beat the Usos tonight to guarantee that they will be gone. Jey points out that Rollins doesn’t have a partner because no one likes him….but here is Kevin Owens to take the spot. Reigns wants to raise the stakes: if Rollins and Owens lose, the Rumble title match is off and Reigns is going on vacation until Wrestlemania. Rollins says he’s on.

Here are Madcap Moss and Happy Corbin to brag about their recent success, along with saying Kofi Kingston has no friends.

Happy Corbin is here too….so Kofi brings out Big E. to even things up. Moss shoulders Kingston down to start but he comes back with a middle rope spinning dropkick. Kingston gets sent outside, where he jumps off the steps to take Moss down again. Big E. takes out Corbin and we go to a break. Back with Moss hitting a spinebuster but missing a charge into the corner. A top rope hurricanrana gives Kingston two as Big E. continues to look on stoically. Moss plants him again for two more but it’s Trouble in Paradise to give Kofi the pin at 7:42.

Post match Corbin, who is holding his arm, gets up to stare at Big E., who gives Moss the Big Ending.

Rematch from last week where Aliyah won in three seconds. Summer Rae, billed as a legend and now with red hair, is watching from the front row. Aliyah rolls her up for two to start but gets suplexed for her efforts. Back up and Aliyah is sent to the apron, where she comes back with a forearm. Natalya blasts her with the discus lariat for two, followed by the over the shoulder backbreaker. With that broken up, Natalya stomps away in the corner until it’s a DQ at 2:10.

Result: Aliyah b. Natalya via DQ when Natalya attacked in the corner (2:10)

Post match the beating stays on until Xia Li comes out for the save.

Commentary hypes up Wrestlemania, with McAfee listing off about two dozen ways to describe how great it is, even busting out a dictionary.

Erik slams Humberto to start and then slams Ivar onto him to make it worse. Angel comes in off a blind tag though and it’s Erik getting jumped from behind. That means Angel can TAKE OFF HIS PANTS and ti’s a double basement dropkick. The standing moonsault misses though and the hot tag brings in Ivar to clean house. Everything breaks down and Erik hits a powerbomb/World’s Strongest Slam at the same time. The Viking Experience finishes Humberto at 2:23.

Non-title but a Champion’s Contender’s match, which Cole describes as an opportunity at an opportunity. Hold on though because here is Sonya Deville to be referee. Charlotte uses the distraction to forearm Naomi into the corner so the stomping can ensue. The Figure Four necklock has Naomi in trouble but she fights up for a springboard kick to the face. Charlotte is fine enough to grab a Boston crab, which doesn’t go very far.

Instead Charlotte tries the Figure Four but gets kicked off into Sonya. The Rear View connects but Sonya stays on the floor instead counting. Charlotte goes after the leg and puts on the Figure Four, drawing the bell for the submission at 2:24, before she even completes the hold. McAfee: “What in the Bret Hart is going on?”

Seth Rollins and Kevin Owens are ready for the main event, with Owens saying it’s time to take out the Usos so they can’t screw Rollins over again. Rollins says the risk is worth the reward, because he beats Reigns every time.

Here is Sami Zayn for the latest episode of In-Zayn, which will be looking at self defense. Johnny Knoxville once got famous by looking at a bunch of these weapons, and that is what Sami is going to do again here. We’ll start with a stun gun designed to stop large animals, including a rhinoceros. Sami shoots himself in the leg but doesn’t go off his feet. We’ll crank it up to level two, with this one going into his heart.

That one takes him off his feet, but here is Johnny Knoxville to interrupt. He doesn’t think much of Sami mocking his career, and points out that Sami didn’t turn the stun gun on. Knoxville fixes that for him and shocks Zayn down, complete with Mountie shock stick sound effects. Sami can’t stand up so Knoxville tosses him over the top.

Eric Bischoff is in Adam Pearce’s office when Sonya Deville comes in. Pearce isn’t happy with what she has been doing, so he is going to recommend she face Naomi next week, one on one.

Ridge Holland is back and in Sheamus’ corner. Sheamus knees him down to start and grabs a chinlock, with Ricochet jawbreaking his way to freedom. The forearms to the chest put Ricochet down again, as Cole says the only title Sheamus has won everything but the Intercontinental Title. Ricochet knocks him to the floor but his suicide dive is kneed out of the air. Back in and the Brogue Kick finishes Ricochet at 3:18.

Rick Boogs and Shinsuke Nakamura run into Jeff Jarrett, with Boogs knocking how to spell his name. Jeff likes Boogs’ guitar playing but asks if Boogs can spell his name.

Non-title but if the Rollins/Owens win, the Usos are barred from the Royal Rumble title match. If the Usos won, the title match is off. Rollins rolls Jimmy up for two to start and Jimmy bails to the floor, where he complains of a pull of his tights. Back in and the Usos stomp Rollins down in the corner. Rollins fights up and it’s Jimmy being taken into the other corner for some alternating stomps of his own. A Jey distraction lets Jimmy crotch Rollins though and the stomping in the corner is on again.

That one doesn’t last long either as Rollins is back up with the tag to Owens so house can be cleaned. The Cannonball looks to set up the Swanton but Jey gets the knees up. Owens is sent outside and into the barricade as we take a break. Back with Owens still in trouble but managing an enziguri for a breather. The tag brings in Rollins to clean house, including a suicide dive onto both Usos.

The springboard knee to the face gets two on Jey so Rollins loads up the Buckle Bomb. That’s broken up though and the Alley Us gives Jimmy two. Everything breaks down and Owens gets caught on top, only to hit the spinning fisherman’s superplex for two. It’s back to Rollins to strike away on both Usos until a superkick takes him down. The Stunner hits Jey and Rollins superkicks Jimmy. A forearm to the back of the head hits Jimmy and the Stomp connects but here is Roman Reigns to lay Rollins out for the DQ at 15:03.

Reigns storms off and Rollins smiles to end the show. 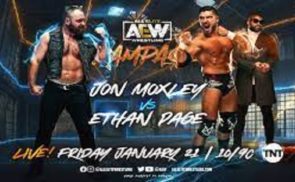