It’s back to the blue side this week with the continuing issues between Sami Zayn/Kevin Owens and Shane McMahon. The question is now becoming where Daniel Bryan fits into this whole thing, which could open up a bunch of new directions as we move forward. Let’s get to it.

Here are Sami and Owens to open things up so we look at a clip of Zayn helping Owens defeat Randy Orton last week. Owens talks about what happens when you’re the victims of a McMahon Family grudge and how they’re the latest names on that list. This all stems from humiliating Shane in their Cell match and the plan didn’t even work. They’ve beaten Shane at every turn, which really isn’t all that hard.

Sami explains the differences between being in the ring and being at ringside before walking up the ramp, saying that’s no longer being at ringside. Therefore, he didn’t break Shane’s ruling last week and everything is fine. With Sami in the aisle though, Orton sneaks in with an RKO to Owens. This brings out Shane, to make Sami/Owens vs. Orton/a partner of Randy’s choosing for Clash of Champions. As for tonight, Sami can work off some energy by facing Orton in a one on one match. Just to keep an eye on Owens, he’ll be handcuffed to the ring ropes.

Before the match, English debuts the 12 Days of Rusev but Big E. cuts him off before the third day. English tries to suplex Big E. to start so we hit the gyrating. Kofi comes in and hits his jumping clothesline but Rusev pulls Aiden outside. Some dancing takes us to a break.

Back with English holding a chinlock until it’s back to Rusev for some kicks to the ribs. Rusev grabs a bearhug for a bit until a double stomp out of the corner gets Kofi out of trouble. The hot tag brings in Big E. for the house cleaning and Kofi nails the big dive over the top onto Rusev. Back in and Kofi’s springboard is broken up, allowing Rusev to superkick him for the pin at 9:24.

We look back at the Hype Bros splitting.

Mojo Rawley is tired of hearing about what he did to Zack Ryder last week. With Ryder out, things were going up. He won the Andre the Giant Memorial Battle Royal but then Ryder had to come back and drag him down. If anyone has a problem with him, they can shove it.

English and Rusev have been added to the title match.

Lana, Carmella and Tamina aren’t happy with Natalya getting another Women’s Title match. Daniel Bryan says Carmella can be involved if she cashes in the briefcase but she says no. The Riott Squad comes in and wants to know why Ruby isn’t involved in the match. Is it because he doesn’t like her tattoos? Sarah Logan asks if it’s because Bryan has something against people from Kentucky (she’s from Indiana) and something about tasting live game. Bryan finally snaps and makes the title match a lumberjack match.

Bobby Roode and Baron Corbin get into a math argument over triple threat match. Thankfully, Dolph Ziggler comes in to brag about his success and promise to win the title.

Carr gets knocked outside to start and Harper hits a heck of a lariat. Back in and the reverse powerslam plants James. The double spinebuster is good for the pin at 1:02.

We look at Charlotte in Psych: The Movie.

Owens has talked to Daniel Bryan, who will think about intervening in the main event stipulation. For now, they wait.

Non-title with Dolph Ziggler on commentary. Corbin pokes him in the chest to start but Roode dropkicks him in the ribs to send him outside. A hard right hand rocks Roode though and it’s off to a chinlock. Back up and Roode kicks at the knee before stopping a charge in the corner. The Blockbuster doesn’t work and it’s a double clothesline for a double knockdown. Ziggler stands up and gets in the ring for a Zig Zag on Roode and the DQ at 3:27.

Corbin gets a Zig Zag as well.

Natalya tries to get Tamina/Lana/Carmella to be on her side against Charlotte. They don’t seem interested. The Riott Squad comes up and Natalya backpedals in a hurry. A lot of sucking up ensues and Natalya bails.

Non-title with Lana, Natalya and Carmella are at ringside. Charlotte works on the arm to start but gets shoved down with ease. A running kick to the chest gets two on Tamina but she drives Charlotte into the corner as we take a break. Back with Charlotte snapping off some chops and getting a rollup for one. The Figure Eight makes Tamina tap at 6:42.

Post match the three on the floor get on the apron with Natalya saying this is a preview for Clash of Champions. Cue the Riott Squad to say we need a real preview, including the real stars of the show. The lumberjacks get into it with Lana and Carmella having to hold Tamina back. Charlotte leaves as everyone else sneers at each other.

Bryan won’t help Kevin in the main event and the handcuffing goes through.

Before the match, Bryan and security is ready to cuff Owens. Kevin says no, but Bryan threatens him with suspension. Orton wastes no time in taking Sami outside and dropping him back first onto the barricade. Sami starts running and hides next to Owens in a smart move. That’s fine with Orton, who grabs Sami and bounces him off the announcers’ table.

Owens offers a distraction though and Sami gets in a hard shot to take over for the first time. Some trash talk from Owens takes us to a break. Back with Sami stomping away and saying he’s not afraid of the Viper. Sami snaps his throat across the bottom rope and pulls out some bolt cutters. Orton breaks it up before the chain can be cut but Sami posts him instead.

Back in and Sami gets crotched, setting up a top rope superplex to put both guys down. Owens grabs the cutters and gets free, only to be taken down by an Orton clothesline. The RKO is loaded up but Owens offers a distraction so Sami can get two. The RKO doesn’t work but the Helluva Kick misses as well, allowing Orton to grab a rollup for the pin at 11:44.

Post match the beatdown is on until Shinsuke Nakamura makes the save. The heroes shake hands and we seem to have a partnership. Owens takes and RKO and Zayn gets a Kinshasa.

Shane and Bryan are in the back and Shane says he’s not done with Zayn and Owens. He’s going to be the guest referee at Clash of Champions and if Sami and Owens lose, they’re fired from WWE (meaning they can’t go to Raw). Bryan doesn’t look pleased to end the show. 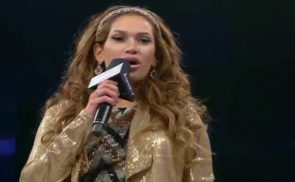 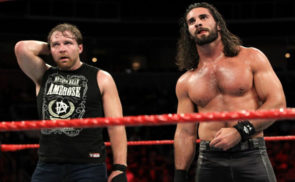