It’s off to the big city this week as the build towards whatever their next big show will be. In theory that will be the Christmas night episode but they won’t be on pay per view again for a good while. The big story is the issue between Kane and Braun Strowman, because for some reason Kane needs to be built up to be fed to Strowman. Let’s get to it.

We open with a recap of Roman Reigns defending the Intercontinental Title against Elias and then being choked out by Samoa Joe.

Here’s Kurt Angle to get things going. He’s ready to announce that Roman Reigns will be defending the Intercontinental Title against…..someone but Jason Jordan comes out to interrupt. He wants Reigns, despite his bad knee. Jordan lists off the people he’s been in the ring with, bad knee or no bad knee. This brings out Reigns to say he wants Joe. Jordan still wants the shot so Reigns tells him to step up and take it. Now it’s Joe coming out to say Reigns knows he can’t beat him. Jordan actually suplexes Reigns so Roman says it’s on right now.

Reigns is defending and knocks Jordan outside to start. Back in and Jordan’s right hands don’t have much effect and Reigns clotheslines him outside again. Jordan fights out of a chinlock and drives Reigns into the corner four times in a row. The running shoulder doesn’t work but Reigns is sent shoulder first into the post.

Back from a break with Jordan working on the arm and Samoa Joe watching from the stage. Reigns fights up and hits the corner clotheslines, only to walk into a dropkick for a near fall. They head outside again with Jordan driving him into the steps a few times. That’s only good for two more though and we take a second break.

Back again with Reigns putting the bad knee in a half crab. Jordan reverses into a small package but gets his head taken off by the Superman Punch. Some rolling belly to belly suplexes (with the bad knee raised in the air) give Jordan two more but it’s the spear to retain the title at 20:34.

Post match Joe comes in and chokes Reigns, only to have Jordan make the save with a suplex. Reigns Superman Punches Jordan to the floor.

Post break Jordan wants a match with Samoa Joe but Angle finally snaps, telling him to quit demanding things. Angle finally says he’ll take it under advisement but here’s Joe to deck Jordan from behind, knocking him head first into a wall.

Alexa Bliss is on commentary again and Banks has Bayley and Mickie with her. Sasha wastes no time in throwing Paige down and hammering away both on the mat and in the corner. Paige kicks her down and stomps away as well before hitting the chinlock. Some shouting sets up a front facelock as things stay slow.

Sasha fights up with a high crossbody for two before grabbing a cross arm choke. Paige makes the ropes so Sasha just hammers away to keep her in trouble. The Bank Statement is broken up and they fall out to the floor as we take a break. Back with Paige grabbing her front facelock as Bliss calls Cole rude for bringing up her leaving last week.

Banks fights up with a clothesline and some dropkicks, only to miss the running knees in the corner. Paige heads up top and catches Banks with a sunset bomb. The Rampaige is countered into the Bank Statement but Paige gets her foot under the rope. The other four get in a brawl on the floor though, allowing the Rampaige to put Banks away at 16:06.

Post match Absolution takes out the other two, including Rose gordbusting Banks onto DeVille’s knee.

Elias comes in to see Angle and wants another shot at Roman Reigns. Since there’s no match though, it’s just going to be a concert. Angle offers to give him a match later anyway.

Video on Braun Strowman vs. Kane.

Enzo Amore gives the Zo Train a pep talk. The team leaves and Nia Jax of all people comes up and asks Enzo how he’s doing. The fans seem very, VERY interested in this.

The winner faces Rich Swann next week in a #1 contenders match. Alexander dropkicks Gulak to the floor and Ali takes care of Nese, giving us a good guy showdown. Ali headlocks him to little avail but we’re quickly off to a standoff. Gulak and Nese pull Ali outside though, leaving Cedric to take them down with a big flip dive.

Back in and Cedric gets caught in the Tree of Woe so Nese can do the situps into the kicks to the ribs. That’s still a great little spot and works so well for him. Gulak won’t let Nese go up top though, allowing Ali to come off the top with a high crossbody. It’s Cedric coming back in and cleaning house, including a springboard Downward Spiral to Gulak.

Ali is back in with his rolling X-Factor to Nese, followed by the springboard clothesline to Gulak as we take a break. Back with Cedric fighting out of a chinlock and hitting the moonsault kick to Gulak’s head. Nese tries to make a save but gets sent outside. A standing C4 catches Ali for two with Nese making another save.

Cedric goes up top so Ali returns the favor with a springboard C4 but this time it’s Gulak breaking it up. Ali can’t hit the 054 though, leaving Alexander to hit a pair of Lumbar Checks. That’s fine with Gulak, who slides in with a knee to Alexander to steal the pin on Ali at 15:54.

Gulak teases a PowerPoint presentation but we see Elias walking through the back instead.

Here’s Elias to say he’s awesome and sing about it to make everything clear.

Elias bails so Strowman catches him without too much trouble. A toss sends Elias flying out to the floor, meaning it’s guitar time. That has no effect whatsoever and it’s the running powerslam to plant Elias. The bell never rang so no match.

Strowman throws the steps inside but here’s Kane on the screen. He talks about Strowman forgetting how to be a monster among monsters and offers to take Strowman into the abyss.

The Shield is ready to get their titles back.

Fox actually throws her down to start so Asuka smiles up at her. A shoulder just annoys Asuka and it’s a big hip attack to drop Fox. One heck of a kick to the face gives Fox two but the ax kick misses. Asuka kicks her in the head and the cross armbreaker makes Fox tap at 2:23.

Post match Absolution comes out to stare Asuka down but they let her leave. Instead they surround Fox, who Paige calls her only friend. Paige is sorry though and the triple beatdown is on.

Preview of Charlotte in Psych: The Movie.

Dallas wastes no time in trying some rollups, only to get dropkicked in the face for his efforts. Balor goes up but Curtis Axel kicks the steps for a distraction, allowing Dallas to shove him down. Some kicks to the ribs set up an armbar for a good while. Balor fights up with some forearms and a jumping double stomp. The Sling Blade sets up the shotgun dropkick and the Coup de Grace ends Dallas at 5:20.

We look back at Matt Hardy going nuts and look at his Twitter.

Bray Wyatt asks who Matt Hardy is. The universe knows but Bray doesn’t think Matt knows. Broken Matt pops up on the screen and says he’s traveled through space and time. Back to Bray, who says Matt knows nothing of what is actually will. Matt says he’s familiar with all facets of the multiverse and has danced with Cleopatra and meditated atop the pyramids of Giza. He has laid dormant in this vessel called Matthew Hardy but now he is WOKEN. Bray promises to burn him but Matt sentences him to DELETION. A battle of laughter ensues and the fans are rather behind Hardy. Cole: “You catch all that Book?” Booker: “Yeah.”

Kane vs. Strowman is set for next week.

The Bar is defending. Ambrose armdrags Cesaro down to start buts it’s off to Sheamus to take over. A double kick to the ribs has Dean in trouble and we hit the choking on the ropes. That doesn’t last long though as Dean leapfrogs over Sheamus and makes the hot tag off to Rollins. The Sling Blade give Seth two but Sheamus posts him as we take a break.

Back with Seth not being able to get away as the champs clothesline him down. The ten forearms to the chest rock Seth again and a top rope clothesline gets two. Ambrose gets knocked off the apron, leaving Sheamus to drop Rollins onto an uppercut for another near fall. It’s off to an armbar for a bit until a superkick gets Rollins out of trouble.

The hot tag brings in Ambrose and house is cleaned in a hurry. His suicide dive is cut off by an uppercut though and Cesaro adds the high crossbody. Everything breaks down and Sheamus’ cheap shot gives Cesaro two on Dean. A powerbomb is broken up and Seth superplexes Sheamus into a Falcon Arrow for a very near fall.

The Neutralizer is broken up and the Wind-Up Knee gives Seth two with Sheamus making a save. The referee is shoved though and the Bar retains the titles via DQ at 17:11. Actually hang on as Angle comes out and says restart the match with No DQ. The double dives takes the Bar out and a frog splash to Cesaro gets two. Cue Samoa Joe to lay the Shield out though, drawing out Reigns to chase him off. The distraction lets Sheamus Brogue Kick Ambrose to retain at 20:03. 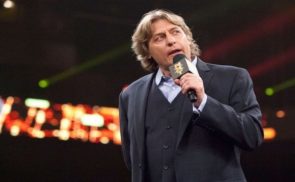 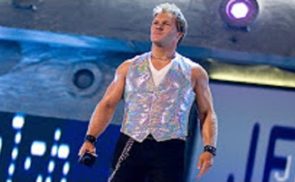 Will Chris Jericho be at “Wrestlemania XXXIV”?