It’s the go home show for Wrestlemania and for once, there are some important things actually happening here. This time around we have the Andre the Giant Memorial Battle Royal, plus a Smackdown Tag Team Title match. Normally I would have an issue with the titles being defended on Smackdown instead of the pay per view, but considering they have not been defended since Dolph Ziggler and Bobby Roode won them in January, how important can they be? Let’s get to it.

We open with a recap of Daniel Bryan going after Roman Reigns and Edge.

Now Bryan is known for his association with the word YES, but there are people who don’t think he should be involved in the main event of Wrestlemania. Just ask Batista and Randy Orton, or Edge and Roman Reigns. They will tell you no, but Bryan knows the truth and that is how he came to say yes yes yes. Bryan was told he would never wrestle again but he said yes. Then he was told he would never headline Wrestlemania again. Adam Pearce said no, but he said yes.

This Sunday is the biggest match of his career. You have Edge who thinks Bryan stole a spot from him. Then you have Roman Reigns, who knows Bryan can beat him and that means Reigns is nothing that he thinks he is. Bryan is willing to do anything he has to do to win this the title, which brings him to the last question: can he walk out of the main event of Wrestlemania as Universal Champion? Yes. YES. YES!!!

The Street Profits are joining in on the YES chant when Bobby Roode and Dolph Ziggler attack them. The Mysterios and the Alpha Academy join in and the big fight is on.

Roode and Ziggler are defending and it is one fall to a finish. We are joined in progress with Dominik getting stomped in the corner and the champs have to make a save. A back elbow gives Roode two on Dominik and we hit the chinlock. Dominik fights up and the hot tag brings in Rey to clean house. Everything breaks down in a hurry with the Mysterios cleaning house, including back to back dives to the floor.

We take a break and come back with Roode working on Ford. Otis comes in to drop a big elbow on Ford and it’s off to Ziggler for the chinlock. A nice dropkick puts Ford down again but the Fameasser is countered into a helicopter bomb. The hot tag brings in Dawkins to clean house but Rey tags himself in and sends Dawkins outside.

The Mysterios clean house and Dominik’s frog splash gets two on Roode, with Otis splashing them for the save. Everything breaks down and Dawkins sunset flips Gable for two. Gable’s backslide gets the same but Ford tags himself in and hits the huge frog splash on Gable to knock him silly. Roode tags himself in though and steals the pin to retain at 13:05.

Bianca Belair is nervous about the Wrestlemania title shot but she isn’t scared. This is the biggest opportunity of her career and the chance makes her dangerous. When she wins the title, it is the greatest night of her life.

Big E. is getting a haircut in his hometown of Tampa because this is where he comes to get his mind right. He takes us on a tour of Tampa, including near his high school where he would run two miles before he would go on to win a state championship in wrestling. Then we have Raymond James Stadium where he played in a high school all star football game and where he took a piece of the field with him. Now it is where Crews is defeated at Wrestlemania.

Long video on the Fiend vs. Randy Orton.

Reginald, Shayna Baszler and Natalya are all here too. They shove each other around to start and Tamina backhands her into the corner to start the beating. Tamina and Shayna get in a tug of war over Reginald so Nia runs her over off the distraction. Nia misses a charge into the corner but Baszler offers a distraction, allowing Nia to crotch her on top. Tamina hits a superkick to the ribs and a Samoan drop for a delayed cover but Shayna comes in for the DQ at 2:58.

The Riott Squad is ready for Tag Team Turmoil but Carmella and Billie Kay come up and confirm that they are in the match as well. Dana Brooke and Mandy Rose and Lana and Naomi come in and the big brawl is on. Natalya and Tamina come in to leave everyone laying.

We get an election ad style video on how you don’t know the real Cesaro. You know Seth Rollins though, because he is the kind of a person who you can believe in. Paid for by the Friends Of Seth Rollins.

Here is Edge for a chat. He sits in a chair with a spotlight on him and talks about how he needs to manifest his dreams. Yes he won the Royal Rumble and some fans would ask if that is enough. Those people do not understand what it means to come back after nine years off and how hard it is to get this far. Edge did not come back to be a shell of himself because he wants to steal the show. He wants to be Universal Champion and does not want to hear from Daniel Bryan.

Remember when Bryan had all of those ridiculous ideas about how he could be involved with the title match? Bryan needs to go be some bookstore clerk and stop sticking his nose in their business. Then there is Roman Reigns, who walks around like Edge owes him something. In reality, Reigns owes him, because think about it. Reigns came into the company in a three man group, made his entrance through the crowd and uses a spear as his finisher. Edge: “You’re the Samoan Edge.”

This match is taking place ten years to the day that he had to vacate the title but you don’t get a video package set to piano music on that. If it is Daniel Bryan doing this, that video is made in a heartbeat. Edge fought back through a torn tricep and won the Royal Rumble so why is he having to jump through hoops?

Edge isn’t phoning this in because he is doing this at a level that no one has ever done after coming back from this kind of an injury. That is a slap in the face to him and his work ethic so it is time for him to take and command the respect that he deserves. He is the Rated R Superstar and winning the title is his dream. Now he will manifest it.

Sonya Deville talks to Adam Pearce and thinks it should be Edge vs. Reigns in a singles match. She leaves him with that thought.

Sasha Banks isn’t worried about Bianca Belair. After Belair taps out at Wrestlemania, she will know her place in WWE, which is beneath Banks. At Wrestlemania, Banks will prove that she is the V-EST.

Video on Bobby Lashley vs. Drew McIntyre, which will open night one.

Sami Zayn came in to see Logan Paul and Jake Paul at their boxing training session and invited himself in. Then he accidentally locked himself out of the gym, where another boxer won’t let him back in.

In the arena, Sami storms the announcers’ table and wants to know how that tape was shown. Sami promises to end Kevin Owens at Wrestlemania. Speaking of Owens, here he is to attack Zayn and send him running.

It’s a big brawl to start as tends to be the case in a match like this. Cedric and Shelton get rid of Tozawa and then do the same to Tucker (with his shiny silver pants). Everyone else goes after Shelton and Cedric, who are ready to go. They’re also ready to be sent outside as it’s a double elimination to send us to a break. Back with Erik being tossed out and Gulak earning the same fate.

Mace and T-Bar get together to throw out Carrillo, who lands on Gulak. There’s a jumping knee from Elias to get rid of Slapjack, giving us Mace/T-Bar vs. Ryker/Elias. Mace and T-Bar get rid of both of them but Ali dumps Mace. Murphy saves Ali from an elimination for some reason and Ali gets rid of T-Bar. The Lucha House Party teases a reunion but Dorado won’t do the dance. That means a double team on Kalisto and he gets kicked out without much trouble. Carrillo dumps Dorado but gets backdropped out by Corbin as the ring is clearing out in a hurry.

We take a break and come back with Murphy and Garza slugging it out on the apron. Garza TAKES OFF HIS PANTS but gets kicked in the face. That’s not enough for an elimination, but Corbin shoving Murphy off the ropes certainly is. Nakamura gets rid of Garza and we’re down to Nakamura, Ali, Corbin, Uso and Ricochet (not too shabby). Ali and Ricochet fight to the apron and Ricochet headscissors Ali out.

Uso superkicks Ricochet out though and we’re down to three. Another superkick puts Corbin on the apron and Nakamura knees him out. Nakamura elbows his way out of the Samoan drop and nails the spinning kick to the head. Uso hits a superkick but Nakamura blasts him with Kinshasa. The elimination is reversed though and Uso wins at 15:44.

Post match here are Roman Reigns and Paul Heyman for the big final chat. Reigns doesn’t know why he is here because he is in a title match when he doesn’t even have to be pinned to lose. No he isn’t worried about winning on Sunday because when you spend every day at a 12, wrestling at a 10 isn’t hard. Maybe he can have one good week like Daniel Bryan and Edge, but he has been having great weeks since August 23 at Summerslam.

Reigns made this title relevant but the fans cut him off with the YOU TAPPED OUT chants. That makes Reigns chuckle, because if Bryan made him tap, he would be champion. Then you have Edge saying no one took the title from him. Reigns: “That’s garbage.” Reigns took it from Edge and the comeback story ends at Wrestlemania. Being in the main event with Roman Reigns is Edge’s dream and that is where it ends. It is also where Reigns’ dream begins, because what he has done in the last year is just the start.

Reigns is the head of the table and that makes him unselfish. The dreamers are the ones who are selfish because it is all about them. Who gave Jey Uso the greatest year of his career? They have the gold right over there (the Andre trophy) to prove how great it has been. Reigns is going to smash the two of them on Sunday and the referee is going to count 1-2-3. They are going to look up and see a greater man than them as the whole world acknowledges him.

Historic Announcement Made For WrestleMania 37 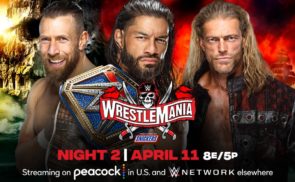