It’s the go home show for Night of Champions and since this is Friday, we’re not likely to see Cena or Lesnar, meaning nothing important is going to happen tonight. WWE has done a very bad job building up everything other than the main event for Sunday and it really shows when Cena and Lesnar aren’t on the show. Let’s get to it.

Reigns vs. Rusev. Just get to the DQ now.

The brothers that look different say they’re coming for the titles. Jimmy and Stardust fight up against the ropes to start until a neckbreaker puts Jimmy down. Uso tries three superkicks and connects with the final one for the pin at 2:00.

Goldust gets kicked as well.

Haven’t we seen this one a few times now? Cesaro tries to ride Ziggler on the mat but the champion gets away. A slam takes Ziggler down again and Cesaro cranks on a headlock. Back up and Cesaro counters a sunset flip and lifts Dolph all the way into a gorilla press. It’s an awesome power display but Ziggler slips down the back and nails a dropkick. Off to Miz for a kick to the face for two and some posing. He avoids the Fameasser and hooks the Reality Check for two.

We come back from a break with Miz getting two off a top rope ax handle and putting on a chinlock. Dolph counters with a jawbreaker but Cesaro blocks a tag attempt. That earns him the swinging DDT and the hot tag brings in Sheamus. Miz gets caught in the fifteen forearms to the chest and the rolling fireman’s carry gets two. The Irish Curse gets the same and Ziggler backdrops Cesaro to the floor, possibly injuring the big man’s knee. The stunt doubles get into it and Ziggler superkicks Miz into the Brogue Kick for the pin at 11:43.

Slater decks him with a right hand and Rose is in early trouble. He gets a boot up to stop a charging Heath in the corner and a high cross body gets two. Slater stomps him down in the corner again but misses a knee drop. Rose comes back with some forearms and a spinebuster but Titus trips him up. This brings in the Bunny who dives on Titus, setting up the Party Foul for the pin at 2:55.

We recap Henry and Rusev from Raw. This eats up over a minute.

Lana and Rusev are in the back and Lana speaks Russian about Henry and Reigns. Rusev does the same and that’s about it.

I could have sworn this was originally going to be the Usos. Big Show does Torito’s entrance in a funny bit. This is joined in progress with Fernando doing OLE to Rowan. Thankfully Erick picks him up for a fall away slam into the Wyatt corner. Off to Bray for the backsplash before Harper comes in and gets caught in a sunset flip. His response is to hit Fernando really hard in the face, though Fernando is able to get over to the corner for a tag to Big Show.

Rowan comes in as well and takes out Show’s leg, allowing Wyatt to hammer on a downed giant. Harper Gator Rolls Big Show and drops him with a dropkick. The Family starts some fast tagging but Show rolls to the floor and headbutts Wyatt. Bray stops a tag attempt though and Harper hooks a chinlock. That’s fine with Big Show who lifts Luke up and slams him down for a break.

Show misses a Vader Bomb elbow and it’s back to Bray for a chinlock of his own. Wyatt is slammed down just like Luke was and the hot tag finally brings in Diego. Everything breaks down and the Wyatts destroy Los Matadores with ease. Diego dives out to nail Harper but Sister Abigail takes him out for the pin at 8:10 shown.

We look at Reigns vs. Rollins from Monday.

Reigns is ready for tonight and Sunday because the Punch is ready.

Non-title and AJ comes out to do commentary. Nikki shoves her down to start and nails a middle rope spinning kick to the head for two. Paige gets knocked to the floor but she knocks Nikki off the apron just as quickly. Back in and Paige kicks her in the ribs but gets caught with some dropkicks. Not that they matter as the Paige Turner is enough to pin Bella at 2:57.

Post match Paige and AJ do their usual with AJ holding the title. Nikki lays them both out and holds up the belt, despite getting pinned about a minute earlier.

Rematch from Raw where Jack made Dallas tap. Jack takes him into the corner to start but Bo slaps him in the face. A chase goes badly for Bo with Swagger clotheslining him hard. Dallas is sent hard into the table but grabs a neckbreaker to take over back inside. Swagger comes right back with a suplex and Vader Bomb but Bo runs to the floor again. Another chase results in Swagger’s throat being snapped across the top rope, setting up the Bodog for the pin at 2:48. Another short match in a series of them tonight.

Bo says the usual post match and says Jack will wind up being like Zeb Colter if he keeps up. Colter stole three packs of sugar and is a TERRIBLE TIPPER! Jack wouldn’t want to be someone like that would he? Swagger chases him off.

Long package on Cena vs. Lesnar with clips from the brawl on Monday spliced together with the sitdown interviews from Lesnar and Heyman.

This week’s sitdown interview was with Lesnar, who called himself a prize fighter. In this fight, John Cena is going to get another beating.

Henry feels good about his rally on Monday but admits he lots to a Russian in 1992. Another Russian defeated him in 1996 even though he was injured. This Sunday, he will crush Rusev.

They lock up to start and fall out to the floor before heading right back inside. Reigns nails a big running elbow to the face but gets caught with a kick to his own face. Rusev puts on a quickly broken bearhug before dropping Roman with a spinwheel kick. We take a break and come back with Reigns caught in a reverse bearhug. Reigns fights up and hits a running clothesline to put both guys down.

Rusev charges into a Samoan drop and Reigns hammers away. The Apron Kick looks to set up the spear but Rollins comes out for a distraction. Rusev kicks Roman in the jaw and starts working on the back. The Accolade is countered with something like Cena’s ProtoBomb but with Reigns driving Rusev down (he basically throws him into the air and clotheslines Rusev’s stomach) but Rollins comes in off the top with the briefcase, accidentally hitting Rusev for the DQ at 9:27.

Reigns and Rollins brawl into the crowd and here’s Henry for the brawl. The American flag comes down and Henry slams Rusev to end the show.

This concludes our live coverage of Smackdown. Make sure to join us on Sunday night at 8pm EST for Night of Champions 2014. 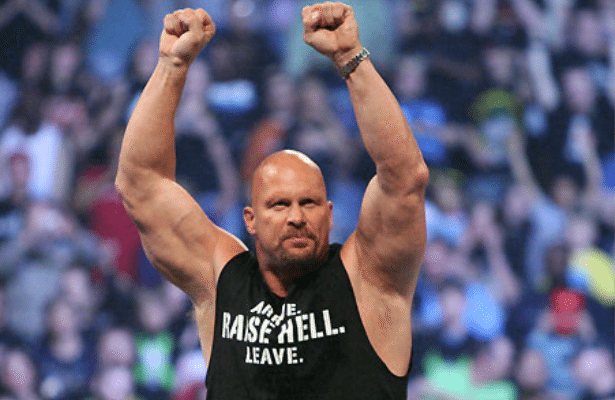 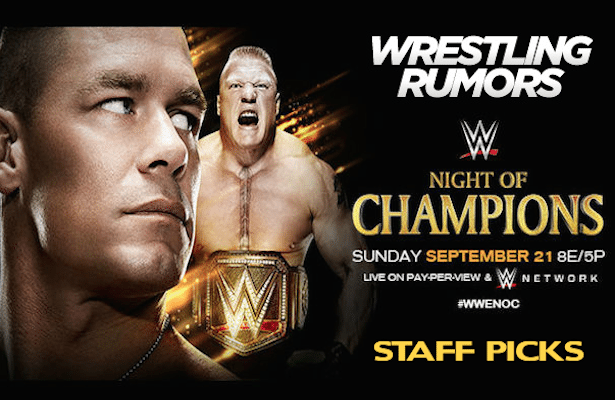