It’s an interesting week here as we are over in the United Kingdom (or in Manchester, New Hampshire if you believe WWE.com) for a taped show because WWE hasn’t gone all over the world enough just yet. That means things could get interesting as we see the matches that were supposed to take place last week before everything went nuts. Let’s get to it.

It’s the standard pre-FOX set, with the basic stage and Union Jack flags on the side.

Here’s King Corbin to open things up. He isn’t happy with the NXT invasion from last week but that’s all over now that they’re here. That brings him to Roman Reigns, who he certainly respects. Reigns has main evented four Wrestlemanias and even came back from leukemia in less than a year. I mean, who does that? But what has Reigns done lately? Now Reigns is a family man who spends time making appearances with children.

It’s like the Big Dog now has some little marbles and sounds like a chihuahua. Corbin shows us a computerized dog head on screen with a high pitched bark. So Corbin went through the time, effort and perhaps money to have that made just for the sake of that ten second visual? There’s no Reigns though because he isn’t here yet but he’ll be here tonight for the main event. Then the fans can get out their dog scoop bags to take care of Reigns. Corbin has such a bag with him for a visual.

New Day is ready to win the Tag Team Titles because they have to keep up with Charlotte. This one is for Xavier Woods.

Revival is defending. Kofi rolls Dawson up for some early near falls and it’s off to Big E. to go after Wilder’s knee. The referee has to check on Wilder and we take an early break. Back with Big E. hitting a belly to belly on Wilder, whose knee is just fine. Kofi comes back in for the dropkicks and the big dive onto both champs. Back in and Dawson avoids Trouble in Paradise, leaving Kofi to get two off the SOS to Wilder.

Big E.’s Rock Bottom out of the corner is broken up and it’s a double hanging DDT to Big E. for no cover. A middle rope uppercut/German suplex combination gives Wilder two but the Shatter Machine is broken up. Dawson gets sent outside and Big E. holds Wilder up for Trouble in Paradise for the pin and the titles at 8:30.

Sami Zayn comes up to Daniel Bryan in the back and suggests that if Bryan had joined up with he and Shinsuke Nakamura, Bryan would be the new NXT Champion. They need to stick together and Sami should could watch Nakamura’s tag match later and see what can be done.

Heavy Machinery comes out for a match but Imperium jumps them. Some Smackdown guys run out for the save.

Bryan comes out to watch as Gable grabs the armbar over the ropes to put Nakamura in early trouble. Cesaro comes in to throw Gable into the corner though, only to have Gable Victory roll his way over to Ali. The big tornado DDT drops Cesaro and everything breaks down.

Gable belly to belly suplexes Nakamura to the floor, followed by Gable and Cesaro joining them. Ali dives onto Cesaro and it’s Gable grabbing the ankle lock. That’s broken up and Nakamura hits Ali with the reverse exploder. Kinshasa is blocked with the superkick but Cesaro sends Gable outside. Now Kinshasa can connect to finish Ali at 4:08.

Bayley is on commentary. Banks has a remixed version of her theme song, including some vocals from Snoop Dogg. Cross gets sent into the corner for some early choking to start, followed by more choking on the ropes. The fans sing to Bayley as Cross starts the comeback with some armdrags. Cross goes after Bayley instead though and grabs the headset to shout something I couldn’t understand.

Banks uses the distraction to get in a cheap shot, only to be small packaged for two. Back with Cross fighting out of trouble and hitting a tornado DDT for a double knockdown. Cross’ crossbody misses but she stays out of the Bank Statement. That works for all of a few seconds before Banks locks it in for the tap at 8:39.

Sami tries to convince Bryan to not do the YES Movement again. The lights go out and the Fiend appears for the Mandible Claw on Bryan as Sami runs away.

Here’s hometown boy Tyson Fury to fire up the crown. He has been around the world and fought everywhere, including last week in Saudi Arabia. That brings him to Braun Strowman, who he wants to see right here in front of him. Cue Strowman, with Fury praising him for a great fight and offering a handshake. They shake hands and Fury says they should be a tag team. Strowman likes the idea but doesn’t think anyone is crazy enough to face them. Cue the B Team, with Dallas saying the B stands for fearless. The beatdown doesn’t take long with Strowman running them over and Fury hitting a right hand.

The winners are two of the five entrants on the Smackdown women’s Survivor Series team, joining Sasha Banks. Sonya throws Carmella around to start as we hear that it’s going to be a three team, fifteen woman Survivor Series match. Mandy and Carmella come in with the latter getting stomped in the corner.

The beatdown continues until Carmella runs over and makes the hot tag off to Dana. A lot of screaming ensues with Dana’s cartwheel moonsault getting two. Carmella superkicks Mandy and throws Sonya to the floor so Dana can flip over her. A dropkick into the steps sets up the Swanton to give Dana the pin on Sonya at 4:00.

Reigns jumps him before the bell and hits a clothesline to the floor. After a quick beating, it’s Corbin coming back inside and hammering away. Reigns hits a big boot but here are Robert Roode and Dolph Ziggler to go after Reigns, because he’s lost the locker room. Corbin catches Reigns with Deep Six back inside and we take a break.

Back with Ziggler getting in another cheap shot so Corbin can send Reigns into the barricade. They get back in and slug it out until Corbin hits a chokeslam. Corbin misses a shot off the top though and Reigns hits a running clothesline for two. Ziggler and Roode come in again though and the distraction lets Corbin hit End of Days for the pin at 9:27. 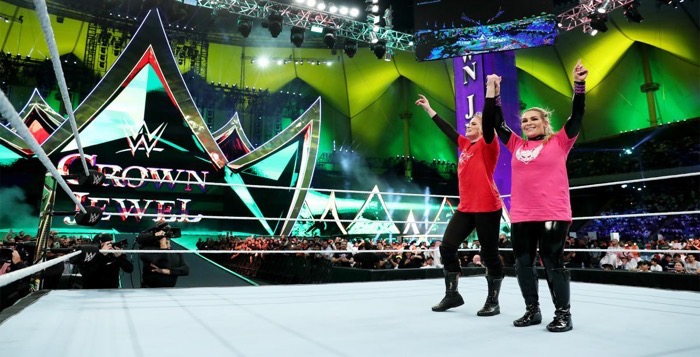 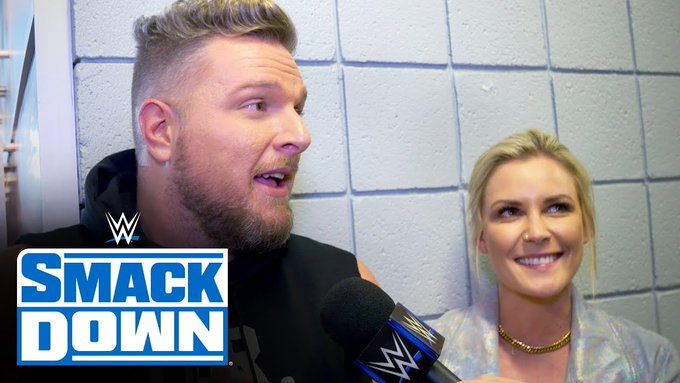