We’re into the second week of having fans back and this time the big story is John Cena returning to Smackdown to see Roman Reigns. You can see Summerslam from here but we still need to make it official. Other than that, Carmella is getting another shot at Bianca Belair for no particular reason. Let’s get to it.

We start fast this week with John Cena starting us off in a hurry. He talks about how hyped up the fans are here and knows that Roman Reigns is coming. There is some sports news coming out of Cleveland today, which is why he has changed his middle name to Guardians (as did Cleveland’s baseball team). He has to protect the little respect that WWE has left because Roman Reigns is terrible as Universal Champion. We’re back live and that means we are on the way to Summerslam, which is a place for the fans to show what they believe in. Whose team are you on?

That gives us a loud CENA chant, so he asks if you’re on Team Jorts or Team Cargo Pants? Team Hustle, Loyalty and Respect or on a team no one respects? Cena wants to know where Reigns is, because at Summerslam, Reigns can’t see him. Let’s get Reigns out here, but here is Paul Heyman (McAfee: “Legend.”) instead. Heyman says Reigns isn’t coming out here, but Cena will get an answer tonight. Then, Cena will know that the Tribal Chief is here. Heyman then does You Can’t See Me and sings (I guess?) the tune of Cena’s song as he walks off.

Commentary makes a special point of going over the titles and accomplishments of these two. Sami takes him down with an armbar and then rakes Balor’s eyes over the ropes. Balor gets sent outside and Sami hammers away, only to have Balor do the same back inside. This time it’s Sami being sent outside for the big running flip dive from Balor.

We take a break and come back with Sami grabbing a chinlock. Sami cuts off a comeback attempt with a DDT but Balor is right back up with a Sling Blade. The Blue Thunder Bomb gets two more on Balor, who pulls Sami right back down for a double stomp. The shotgun dropkick sets up the Coup de Grace to give Balor the pin at 8:51.

Baron Corbin managed to lose money with his Corbin Fund Me because the guy who set up the website stole his identity. He has no credit now and had to ride the bus here. Corbin: “What’s happened to me?”

Here is Mr. Money In The Bank Big E. for a chat. After some YOU DESERVE IT chants, Big E. talks about how he did some crazy things on Sunday (Big E.: “I don’t have any business jumping off ladders!”) but here is Apollo Crews to interrupts. Crews mocks him for only having a contract but here are Dolph Ziggler and Robert Roode to interrupt as well. Ziggler says you better be talking about the two of them if you’re talking about the Intercontinental Title (which we weren’t) but here is Rick Boogs to interrupt. Before he can say anything, it’s Cesaro interrupting as well. The brawl is on and Crews gets a quick Swing.

We go down to the Rolling Loud Festival where Wale leads the fans in a WE WANT THE SMOKE chant and introduces the Street Profits.

The set is different here as the ring is on the stage, with a really long ramp extending out from the ring. There are a TON of people here too, as in several thousands at minimum. Montez Ford and Otis are here too as commentary talks about the other acts performing at the festival.

Gable pulls Dawkins into the triangle choke over the ropes to damage the shoulder again and a top rope clothesline gets two. A suplex gives Gable two more and a German suplex is good for the same. Dawkins avoids a moonsault though and sends Gable outside, only to get caught with a Liger Kick back inside. Gable grabs a backslide for two but Dawkins hits the Anointment for the pin at 3:55.

Carmella is challenging for the second week in a row. Belair rolls her up for an early two but Carmella is back with a flying headscissors. The fans want something else as Belair fights up and snaps off a fall away slam. The handspring moonsault gets two as the fans are saying they want….something. A jawbreaker staggers Belair and an X Factor gets two more. Back up and Belair misses a big boot, which means nothing as she grabs the KOD to retain at 4:47.

Back in Cleveland, Shotzi and Nox are having trouble with their tank. Kevin Owens suggests hitting it with a hammer, which is all he can think of doing. Owens runs into Baron Corbin, who apologizes for treating him badly last week. That is how Corbin has been for years now and he asks Owens for forgiveness. Corbin is even wearing the same shirt as last week (complete with stain) so Owens actually gives him $20. Owens leaves and NOW the tank works, hitting Corbin rather low. Dolph Ziggler and Robert Roode come in to steal the money so Owens chases them off with a chair.

Here is Edge for a chat. Those reactions do something for him and he is so happy to be back. If you saw Money in the Bank, you know he should be Universal Champion but Seth Rollins kept that from happening. Edge thought he had all of his bases covered with the Mysterios, but this was bigger than that. This goes back to when they met in 2014 and Rollins thought Edge would never be back. Well not only is he back, but he is in Rollins’ way. Edge talks about being in the Brood and in the Ministry of Darkness but here is Rollins to interrupt.

Rollins greets Grandpa Edge, who keeps talking about the man he used to be. Edge: “Shut up.” Edge invites him to the ring for a man to man talk but Rollins says Edge knows what can happen to him. As Edge sighs, Rollins comes to the ring and talks about how John Cena and Edge are jumping the line, but the more he thinks about it, the more thrilled he is. Rollins wants the people to give it up for Grandpa Edge because he loves how much Edge wants to talk about him.

If Edge keeps talking about him, the only thing people will say about Edge is how Rollins ended him. Rollins isn’t going to hesitate to pull the trigger the next time he has his boot on Edge’s neck. Edge says he lied about not putting his hands on Rollins so the beatdown is on, including the Impaler. Rollins bails from the threat of the spear, though he does leave his jacket in the ring.

This is Storm’s full time debut. Vega is knocked outside to start but Vega sends her into the announcers’ table. Back in and a headbutt rocks Storm as commentary explains that she is stuck in the 80s. A sunset flip gives Vega two and she rips off Storm’s belt. That is too far as Storm grabs Storm One (starts off like Randy Orton’s backbreaker but flipped over into a cutter) for the pin at 2:34.

Jey Uso and Rey Mysterio are here too. Jimmy decks him to start and a hard whip into the corner has Dominik in more trouble. An enziguri cuts off Dominik’s comeback and Jimmy does not seem impressed. Dominik gets in a quick drop toehold to load up the 619 but Jimmy bails to the floor. Rey deals with Jey and Dominik hits a dive as we take a break. Back with Jimmy kicking him down again as Rey gets knocked down. Dominik tries a springboard rollup but they get into completely different pages and seem rather lost. Jimmy finally stacks Dominik up with Jey giving an assist for the pin at 7:45.

Result: Jimmy Uso b. Dominik Mysterio – Rollup with a push from Jey Uso (7:45)

Here is Roman Reigns to answer John Cena’s challenge. The fans don’t seem thrilled to see him but he demands to be acknowledged. Cena acknowledged him at Money in the Bank but Reigns did not expect to see it. Reigns was expecting a new Cena but it was the same music, the same run to the ring, the same catchphrases and the same everything, just like it was 2005. Reigns: “It’s like missionary position. The same thing every day!”

That’s not how we do it at the head of the table and that’s not what we’re doing at Summerslam. The answer is no, but here is Finn Balor of all people to interrupt. Reigns wants Balor to acknowledge him, but that’s not why Balor is here. If Reigns says no to Cena’s challenge, how about Balor instead? Fans: “ROMAN’S SCARED!” Reigns: “Challenge accepted.”

How Vince McMahon Reacted To A Horrible Match 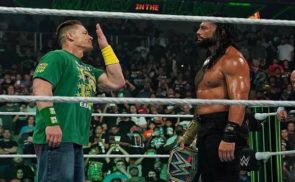