We’re almost to Super ShowDown and things are starting to take shape. That will be the case again this week as we get to build towards Goldberg vs. the Fiend, plus a Women’s Title match between Carmella and Bayley. I mean, neither of them are likely to be on the big show, but at least it’s a possibility now. Let’s get to it.

Here are Alexa Bliss and Nikki Cross for A Moment Of Bliss. In honor of Valentine’s Day, Nikki wants to talk about celebrity crushes. Nikki guesses Bliss’ as Brad Pitt and….that’s it apparently as they bring out their guest: Carmella. Cole to Graves: “Did you do anything special for Valentine’s Day?” Graves: “Leave my personal life out of this, but yes I did. I am the World Champion of love.” Carmella promises to win the Women’s Title tonight and show us why Mella is money.

We see photos of Carmella and Bayley being friends, with Carmella blaming Sasha Banks for their issues. Cue Bayley, who says she tried to take Carmella under her wing and teach her some things, though the fans don’t like the idea. Bayley talks about how much she beat up everyone since she became the champ so Carmella wants to fight right now.

Carmella is challenging and avoids a charge in the corner. A hiptoss and shoulder drop Bayley and we’re off to the armbar. For once, it takes a rope break to get out of an armbar and Bayley shouts that Carmella needs to step up. That’s what she does with a pair of dropkicks for two but Bayley hits her with a Saito suplex. The high crossbody misses though and Carmella gets another near fall off a big boot. Bayley gets kicked outside and that means a suicide dive from Carmella. Back in and a high crossbody gives Carmella two but Bayley sends her into the announcers’ table as we take a break.

We come back with Carmella fighting out of a chinlock and sending Bayley into a boot in the corner. Some forearms put Bayley down but a quick Bayley to Belly gets two. Carmella catches her on top and a super hurricanrana gets two. The superkick connects but Bayley is smart enough to head outside. Carmella follows and gets posted, only to get faceplanted into the Cone of Silence back inside. That’s broken up in a hurry and Bayley grabs a rollup with feet on the ropes for the pin at 14:02.

Post match Bayley stays on Carmella but Naomi makes the save.

Post break Bayley says she won and that she’ll be defending at Super ShowDown because she’s a role model.

We see a clip from Day Of Royal Rumble focusing on a fan who was inspired to stay away from addiction because of Lacey Evans. Lacey had her letter in her boot at the show.

Otis texts Mandy Rose before their date. Tucker comes in and tries to keep Otis calm but Otis wonders if Mandy might actually like him.

Just in case you didn’t get the idea yet. Sheamus gets jumped to start and Shorty hits some rolling Liger kicks in the corner. A running ax handle drops Shorty and Sheamus hits the series of forearms to the chest. Apollo gets a blind tag and Shorty clotheslines Sheamus to the floor so Apollo can moonsault him off the apron. Back in and a standing shooting star press gets two on Sheamus. The Brogue Kick knocks Shorty off the apron and another one finishes Apollo at 3:23.

Carmella wants a rematch and doesn’t care where it happens.

Here’s Hulk Hogan for an interview via satellite to talk about being in the Hall of Fame twice. He’s been in the ring with Goldberg too and the Fiend better be ready for him. Hold on though because the following announcement has been paid for by the Firefly Fun House. Bray comes in, playing the guitar in black and white of course, and says that not he has the Universal Title, brother.

Huskus Pig comes in to say he’s been working on eating right, but succumbs to the temptations of chocolate. Bray: “I hope it’s not…..too sweet.” Hogan says being in the ring with Goldberg isn’t a joke. Bray doesn’t need jokes because he has a Fiend. Be careful, because there can always been room for another picture on the wall. Hogan walks out, saying he’ll see Wyatt at the Hall of Fame.

Here are Cesaro and Sami Zayn, the latter with a ukulele, for a protest concert against Braun Strowman and Elias. Before Sami can channel Bob Dylan, here’s Elias to cut them off. Elias knows that everyone in Vancouver knows what WWE stands for. Sami tells security to let Elias in because a lot of the song has to do with him. Cesaro gets a little carried away with the cowbell (Fans: “WE WANT COWBELL!”). They finally start the song and then go after Elias. Braun Strowman comes out for the save.

Video on Otis and Mandy Rose.

We go to the restaurant where Mandy is waiting for Otis, who is rather nervous. He brings flowers but Dolph Ziggler comes up to Mandy instead. Ziggler sits down as Otis comes in, sees them, drops the flowers, and leaves crushed.

Before the match, Miz asks why the Usos are already missing after being back a month. Morrison has been back for a month and he’s right here. Reigns has a mystery partner and that would be….Daniel Bryan. Hang on though as here’s King Corbin, who was banned from wrestling tonight, with a ticket to have a seat. Joined in progress with Bryan kicking at Morrison, knocking Miz off the apron, and then hitting him with a suicide dive.

The missile dropkick plants Morrison and Bryan gets in the early nipup. The YES Kicks have Morrison in more trouble and there’s a hurricanrana to put him down again. Morrison knocks him outside though and Miz sends Bryan into the barricade. Reigns hits a huge dive over the top onto everyone though and we take a break with Corbin being annoyed. Back with Bryan in trouble as Morrison gets two off a slingshot elbow.

The chinlock doesn’t last long so Morrison kicks him in the head and brings Miz back in. Miz crotches Bryan on top but Bryan ties him in the Tree of Woe. Being smart though, Morrison tags himself in and knees Bryan in the face for two. Morrison misses a 450 and the hot tag brings in Roman for the house cleaning. Roman’s jumping clothesline misses, though the camera is fast enough to switch to cover it well enough.

The Superman Punch misses Miz and Morrison gets two off the Flying Chuck. Starship Pain is countered into a rollup and Reigns Superman Punches Morrison out of the air. The spear is cut off as well and Miz hits the Skull Crushing Finale for two with Bryan having to make a save. Miz takes way too long to load up the running knee and gets Superman Punched (with the camera possibly showing it not coming close, though it might have grazed him) down. The spear gives Reigns the pin at 13:47.

Post match Corbin gets in a shot with the scepter to end the show. 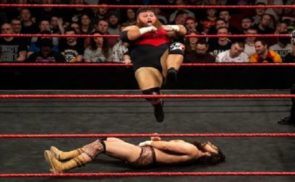 For The First Time Ever: A Major Title Match Will Take Place At Super ShowDown