Jumping the gun? We are in the middle of WrestleMania season and that means every day is going to be seeing some fresh news popping up about the biggest show of the year. It happens every single year at this time and there is no way around it. At the same time though there are other shows to set up as well and sometimes the news about those needs to be adjusted.

We are less than a month away from Elimination Chamber and that show is going to have a big impact on everything else going forward towards WrestleMania 36. The show will likely determine a #1 contender to the Universal Title and that’s a pretty big deal as we move forward. That’s where the Elimination Chamber comes in, but things may not be exactly as they seem.

According to Wrestling Observer Radio, the lineup for the Elimination Chamber match is not established as of yet. The Wells Fargo Arena, the venue for this year’s event, has advertised six names for the show but this lineup was designed to just be six placeholder names. WWE has yet to decide who will be in the match. The names avertised were Roman Reigns, Robert Roode, Shinsuke Nakamura, Daniel Bryan, King Corbin and Braun Strowman.

There have been some bigger surprises in the Elimination Chamber before. Check out some of the better ones:

Opinion: This isn’t exactly surprising and there is always the chance that we could be seeing the announced lineup in there anyway. The Elimination Chamber isn’t something that is going to matter all that much as the winner is hardly a big secret. Anyone paying attention can see that we’re going to be getting Reigns at WrestleMania and while that might not be the most popular move, it makes sense in a match like this.

Who do you see in the Elimination Chamber? Who do you want to win? Let us know in the comments below. 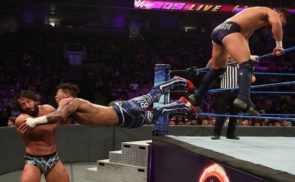