It’s the final show before Payback and for once in a very long time, WWE seems to be on a roll. The AJ Styles vs. Roman Reigns feud is actually quite entertaining and should serve very well as a first challenge for Reigns’ run as champion. Other than that we have Sami Zayn vs. Kevin Owens coming up which should add in some good personal violence. Let’s get to it.

We open with a recap of Reigns attacking Karl Anderson and Luke Gallows, who may or may not be in league with AJ.

Here’s Reigns to kick things off. Before he gets in the ring, Lawler says it’s fun to boo Reigns. Roman talks about punching AJ in the face on Monday because he knows Styles is with Anderson and Gallows. This brings out the Miz and Maryse of all people with the former introducing his wife and comparing Reigns vs. Styles to the Shawshank Redemption. Apparently not a movie fan, Reigns sends him out to the floor (Lawler: “That man can’t handle the truth.”). On a more polite note though, he hands Maryse the Intercontinental Title.

Reigns vs. Miz is announced for later.

The League of Nations is with Renee Young, who says they seem stronger than ever after getting rid of Barrett. Rusev says they’re now the united nations.

This is an open challenge from the League. The three of them argue over who gets to start against Kalisto until Sheamus gets to elbow the masked one in the face. Rusev wants to come in and stomp on Kalisto instead but Sheamus doesn’t seem cool with it. We hit the bearhug with Kalisto bouncing up and down until he flips over for a tag off to Zayn. Sheamus offers a distraction to break up the high cross body though and we take a break.

Back with Sheamus kicking Sami in the face for two and Del Rio adding a Backstabber for no cover. The League gets in a three way argument over who gets to beat on Sami and there goes Del Rio. Sheamus goes up top but hits Rusev by mistake so the Bulgarian leaves as well, allowing Kalisto to come in for his corkscrew cross body. Cesaro does the uppercuts but can’t get in the Swing. That’s enough for Sheamus as he walks out too, earning the countout at 12:04.

After a break, Del Rio gets beaten down in the corner. Sheamus knocks Rusev down too and says the League is finished.

We get the Sami Zayn vs. Kevin Owens video from Monday.

Corbin sends him out to the floor to start and the beating is on early. Back in and a hard elbow to the back of the head sets up End of Days to pin Sandow at 2:10.

It’s time for the Ambrose Asylum with guests Charlotte and Natalya but first of all Dean needs to talk about how Jericho never should have let go of the Walls on Monday because the fight will never end. This Sunday, he’s going to turn Bon Jovi into Meatloaf. For now though, please welcome Natalya.

We get some pleasantries with Natalya saying this looks like a dentist office and Dean introducing her to the plant. “I named him Mitch.” Dean remembers Charlotte tapping a few weeks back and it took Ric Flair to make the save. This Sunday is going to be different though because Natalya is going to have Bret Hart in her corner. Cue Charlotte and Ric with the daughter thinking it’s pathetic that Natalya has to parade her uncle around.

Natalya calls her out on her hypocrisy but Charlotte insists that it’s different. She lists off Ric’s accomplishments but Natalya calls him a creepy old man who has to help his daughter cheat to win. Ric laughs off the idea that Bret can stop him because he beat Bret here in the WWE and in WCW and would have beaten him on the moon if Vince had given them the chance. Natalya says this is the chance for the WWE Universe to have the Women’s Champion it deserves to wrap this up.

Dallas and Axel here. New Day is out on commentary and makes the other announcers stand aside. New Day seems to be fans of Enzo and Cass, with Big E. saying they’re kind of hot. Bo armdrags Enzo down to start and Byron is forced to sit on the floor. Cass throws Enzo at Dallas in the corner but Axel gets in a forearm to the back. Cue the Vaudevillains to watch and it’s a hot tag off to Cass for the house cleaning. The Rocket Launcher ends Axel at 2:45.

Cass promises to show the Vaudevillains how SAWFT they are.

Goldust comes up to R-Truth in the back and says he can feel the Golden Truth after they danced together last week. Tyler Breeze comes in because he’s Truth’s new partner. Goldust is dejected again but Fandango comes in to ask if he wants to dance. Fandango sits next to him and dances anyway.

Crews throws him down to start and Stardust takes an early break on the floor. Apollo goes out after him but gets his leg twisted on the way back in. It’s time to crank on the leg a bit more as the gloves have been taken off. Crews pops up and hits a quick pumphandle slam for his comeback. Two straight enziguris set up the lifting powerbomb to give Apollo the pin at 2:59.

Recap of Stephanie and Shane on Monday.

Roman Reigns vs. The Miz

Non-title and AJ Styles is watching from ringside. Miz actually gets the early advantage by sending Reigns face first into the middle buckle, only to be punched in the face to make things right. Roman kicks him on the floor but gets in a staredown with AJ, allowing Miz to get in a cheap shot as we take a break. Back with Miz holding a chinlock and pulling back on Reigns’ nose.

A top rope ax handle gets two as Byron says this could send a message to Cesaro on Sunday. Reigns gets in a Samoan drop and starts his comeback with the clotheslines. Miz bails to the floor to avoid a spear before sliding back inside for the short DDT. The Skull Crushing Finale is easily broken up though and Reigns gets in the spear for the pin at 10:42.

Post match AJ gets in the ring but here are Anderson and Gallows to beat Reigns down. The Usos run out for the save, even though AJ never touched Reigns. AJ yells at Anderson but Karl takes the spear for Reigns. The Superman Punch misses AJ and it’s a big staredown to end the show. 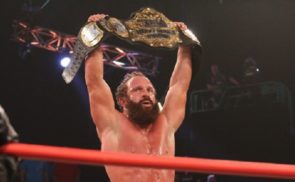 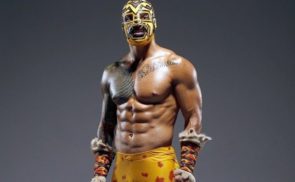