It’s a big night here as we have the battle of the Hardyz with the right to the last name on the line. In this case it’s an I Quit match over the name, as well as a ladder match with all of the Knockouts at once for control of the division. This isn’t about the title but rather about who runs the Knockouts as a whole. Let’s get to it.

We open with a recap of the Hardyz feud and how big tonight is.

Pretty much every active Knockout is involved here. Gail goes after Jade to start as it’s a bunch of brawling all over the place. The Beautiful People dropkick a ladder into the Dollhouse’s collective faces, only to have Jade get up and do the Terry Funk ladder around the head spot.

Gail gets pulled down and slapped by Maria, sending them up the ramp in a chase. Cue Rosemary and the Decay to blast Gail with a kendo stick and kidnap her, even further guaranteeing the winner here. The rest of the match stays broken down with Jade clearing out the ring but getting powerbombed off the ladder by Marti. Maria kendo sticks Velvet down and goes up for the contract to win control at 5:13.

Result: Maria Kanellis won a ladder match by pulling down the contract (5:13)

Drew Galloway is going to call out Lashley right now.

Maria and Mike Bennett are happy.

Decay has Gail in the rafters.

Here’s Drew, with heavily taped ribs, to call Lashley out. Apparently the spears from last week have cracked his ribs and he’s not allowed to wrestle this week. However, the TNA officials didn’t say anything about him fighting tonight. Drew invites Lashley out here to finish the job but it’s Rockstar Spud coming out instead.

Spud says if there was a match right now, he’d easily become the new World Champion. He’s out here to warn us that tonight is the last night that we’re going to see Jeff Hardy. Drew is about to beat him down when Tyrus comes out to say he told us so. Those ribs are a target and that’s what Tyrus likes. He’ll take that title match next week and it doesn’t matter what condition Drew is in. Drew agrees and they shake hands. Spud goes after Drew and it’s a double beatdown on the ribs, including a big splash.

Reby Hardy is holding a camera to film Matt, who promises to make Jeff quit once and for all.

The Decay still has Gail, who Rosemary calls a pawn.

Lee is defending and none of them get entrances. The champ bails to the floor to start but is almost immediately chopped by both challengers. Edwards is sent into the post so Lee hooks DJZ in a chinlock. That’s broken up with a jawbreaker until Eddie comes back in with a hard shot to Lee. Shane Helms pulls DJZ to the floor but Eddie breaks up a superplex attempt. Shane gets on the apron again though, allowing Andrew Everett to run in and shove Eddie into a jumping knee to retain Trevor’s title at 4:20.

Post break Shane and company says that Andrew Everett is the newest member of the Helms Dynasty.

Here are Eric Young and Bram for Eric’s weekly “I’m awesome” speech. He brags about how devastating the piledriver is and says no one can beat him because everyone can try. Young is tired of TNA sucking up to these young punks like the marble mouth Scotsman Drew Galloway.

Therefore, this is the last time you’ll be seeing him because he and Bram quit. Actually not so fast because Bram doesn’t quit. Bram is tired of playing second fiddle to Eric and thinks that King of the Mountain Title would look better around a real man’s waist. Young gets in a quick piledriver and walks off, only to come back and grab a pair of scissors to shave Bram’s beard.

Jeff Hardy thinks the World Title changed Matt and he’ll do whatever he has to do tonight.

Here are Mike Bennett and Maria with something to say. Mike wants all the attention on him because it’s time for a fairy tale. Once upon a time there was a prince with full control over a kingdom and his name was Ethan Carter III. Prince Ethan had it all until one day a white knight called the miracle arrived. Then one day the Prince decided to fight the knight, who took all of the Prince’s power. This is now Bennett’s Kingdom of Miracles but here’s Ethan to interrupt.

Ethan wants the record to show that it was a disqualification win but then he beat Bennett down. He likes a lot of Bennett’s style but at the end of the day, Ethan is just the better man. If Bennett won’t fight him, Ethan will be Mike’s new shadow and beat him down every chance he can. Bennett says that the two of them can fight as many times as they want and he’ll beat Ethan every time because Ethan will keep coming back with another excuse. Ethan talks about how he’s never been pinned or submitted around here but if Mike wants to be the man, face him next week in a No DQ match at Sacrifice. Bennett is game.

Here’s Al Snow to talk about how much he can’t stand this group of fans. They’ll watch every week and complain about it on the internet but then they keep watching. Back in the day, not everyone was allowed in the wrestling business and Snow would never pay to see any of these people in the ring. Tonight, he’s giving Mahabali Shera a lesson in what wrestling really means.

Al jumps Shera during the entrance and stomps him down before grabbing the mic and calling fans into the ring for a fight. Shera makes his comeback and knocks Snow outside, only to have Al crawl under the ring and come out the other side to deck Shera again. Back in and Snow shrugs off another comeback by hitting Shera in the head with a foreign object. Snow takes forever and covers for the pin at 5:35, giving us an overhyped cover and celebrating.

Eli Drake will have his own talk show next week called Fact of Life.

Here’s Decay with Gail for the plan’s payoff. Rosemary calls us all pawns and puppets and threatens to cut off Gail’s hair. Abyss says the only thing that can save her now is Beer Money, so here are the champs for the save. Storm and Roode have to stay at ringside because Abyss has to issue a challenge for the Tag Team Titles. However, he wants the match to have no rules or regulations, which is called the Valley of Shadows. The match is on and Gail is released.

I Quit for the Hardy name. Jeff headscissors him out of the corner to start and they clothesline each other a few times. Jeff can’t get the Twist of Fate so he puts on a Figure Four of all things to make Matt scream no a lot. The hold is turned over twice so here’s Rockstar Spud for the save, only to have Jeff powerbomb him with ease. Matt uses the distraction to knock his brother out to the floor where he pelts a chair at Jeff’s head to break up a dive.

We take a break and come back with Matt bending Jeff’s arm around the barricade but getting pulled into the steel for his efforts. They head into the production area with Jeff swinging a pipe to hit Matt’s ring bell before going up towards the rafters. Jeff slides down the railing with a chair to the head but Matt still won’t quit.

Matt gets knocked onto some cases so Jeff can climb a ladder, only to have Matt climb up and hit a Side Effect to drive him though a piece of barricade. Back up and Jeff grabs a choke to knock Matt out without him quitting. That’s fine with Jeff who goes way up on top of the set for a Swanton onto Matt through a table. The match is stopped at about 18:30 as medics take care of them both and we go off the air.

Results
Maria Kanellis won a ladder match by pulling down the contract
Trevor Lee b. DJZ and Eddie Edwards – Jumping knee to Edwards’ chest
Al Snow b. Mahabali Shera – Foreign object to the head
Matt Hardy vs. Jeff Hardy went to a no contest 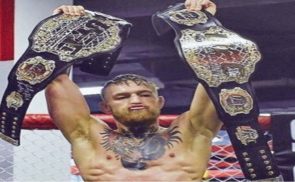