Things are quickly picking up around here with the big showdown of Mil Muertes vs. Matanza coming up a lot faster than expected. The match should be one heck of a brawl between the two hardest hitters in the promotion, though I could have seen it being built up a lot longer. Let’s get to it.

We open with a recap of Dario Cueto introducing the Aztec Medallions which joined together to form the Gift of the Gods Title.

Another recap shows us the trios tournament being set up.

Cage, Johnny Mundo and Taya are in Dario’s office and Johnny quickly figures out that they’re going to be a team. Cage wants to fight Johnny instead but gets shot down. Dario seems to try to hit on Taya but is shot down even faster. We almost get Cage saying he wants the Lucha Underground Title but Dario has heard the catchphrase too many times already and cuts him off.

This is the new Killshot, now in camouflage and wearing dog tags. Argenis misses an early charge and gets dropkicked in the corner. Some LOUD chops have Argenis in even more trouble as Vampiro brings up Jumbo Tsuruta. What might have been a low blow stops Killshot’s run but he easily throws Argenis to the floor for a running flip dive.

Back in and Argenis gets in a chop of his own to set up a top rope armdrag for two. Striker keeps using military lingo as Killshot easily counters a top rope hurricanrana into a brainbuster. That’s enough for Striker to assume Killshot is suffering from PTSD. With Striker talking about IED’s, Killshot loads up an electric chair before flipping Argenis down into a piledriver for the pin at 6:02.

Dragon Azteca Jr. asks Black Lotus how she can work for Dario. She says it’s because Matanza killed Azteca Sr. (it was really her) and seems upset that she had to lie.

Daga is in Dario’s office and gets to compete for one of the Aztec Medallions (now broken up since the Gift of the Gods was cashed in). Tonight he gets Texano, who Dario describes as one of the toughest men he’s ever met, not named Cueto of course. Daga: “That’s because you haven’t met me.”

They start very fast with some quick near falls until Texano grabs a headlock to slow things down. A loud chop has Daga’s dander up before a hard kick puts him right back down for two. More chops and a clothesline seem to have Daga favoring his arm and Texano sends him outside for a good looking dive. Daga is fine enough to fire off a kick and take over, including a running dropkick in the corner.

They forearm it out until Texano kicks his head off to put both guys down. A middle rope Rough Ryder gets two on Daga but a hurricanrana gets the same on Texano. Daga grabs an ankle lock (not something you often see around here) but Texano gets the ropes and plants him with a sitout powerbomb for the pin at 7:21.

Catrina tells Mil Muertes that the Disciples are in the trios tournament but he’s really not pleased. She insures him that they won’t screw up before talking about how devastating Matanza can be. He might even be more powerful than the earthquake that created Muertes.

Rey is looking like the Flash. Cage starts with Dragon and easily drags him around with a headlock. Azteca gets in a kick to the back of the head but is casually thrown across the ring to stop any comeback. It’s off to Puma as Striker brings up their feud from last year.

Cage throws Puma down as well and it’s off to Johnny for a corkscrew moonsault and two. It’s off to Taya and the announcers immediately start the oogling. Some forearms to Puma’s mask get two before he rolls her up for the same. Striker brings up Jem and the Holograms before it’s back to Cage to lift Puma up for a sitout powerbomb. A standing moonsault gets two for Cage but he won’t accept a chair from Mundo.

Cage slaps Johnny in the face for the tag and it’s time for some double teaming, only to have Johnny pull Rey off the apron to break up a hot tag attempt. Not that it matters as Puma tags Dragon in or a quick two off a hurricanrana. The really hot tag brings in Rey for a top rope seated senton on Johnny before sending both Mundo and Taya into the ropes.

They roll away from the 619 attempt but Puma and Dragon hit consecutive dives to take them out again. Cage remembers that he’s in the match though and drops Puma and Azteca, leaving Rey to moonsault Johnny for two. Taya gets back in for a Magic Killer of all things on Dragon, only to have Rey send her outside again. The three masked men are ready to dive but Cage comes back in to clean house.

Some kicks send him to the floor and Puma gets two on Johnny with a 450. A standing C4 drops Puma but Azteca kicks Johnny in the face. Cage splashes Taya by mistake but quickly lifts Puma up in a fireman’s carry. Dragon tries to make a save with a high cross body…..and Cage catches him while still carrying Puma on his shoulders.

Both of the masked men get dropped but Puma escapes Weapon X. Mundo’s Flying Chuck hits Cage by mistake so Rey gives Johnny a 619 before taking Taya down with a seated senton off the apron. Puma’s 630 (which is much more of a legdrop here) FINALLY puts Mundo away at 12:54.

Post credits, Dario warns Matanza of his match with Muertes next week through the cage bars. Matanza has to stay in the cage so no one can steal him from Dario because he’s the most important thing in Dario’s world. “So next week, make me proud and bring death to the dead.” Matanza shakes the cage to end the show. 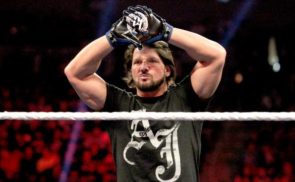 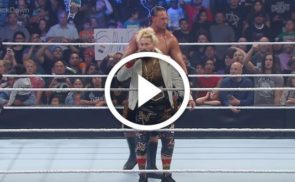