Call them early Christmas gifts? We are on the way to Survivor Series and even though the show is less than a week away, there is still time to make a bunch of changes. That is the case this week as well, as there was a major change to the card thanks to a big title change. The title change came with some special gifts, and now we know a little bit more about them.

During this week’s Monday Night Raw, Drew McIntyre defeated Randy Orton to become WWE Champion for the second time. It was a pretty big surprise, and the first time the title has changed hands on Monday Night Raw in nearly five years. McIntyre came to the ring with a slightly different look this time around and it turns out there is a bit of a significance for that.

Earlier in the night, Sheamus gave McIntyre a chest of ring gear, plus a large sword. McIntyre words the gear to the ring and carried the sword to the stage with him. On Raw Talk, Sheamus said that he gave McIntyre the gear in an attempt to remind him of who he was. Sheamus felt that McIntyre lost his old self when he lost the title and wanted to bring back the old McIntyre.

It was kind of an eventful night. Check out the gift and what it did:

Opinion: I’m curious about where this is going to go and that’s a nice feeling to have. Sheamus vs. McIntyre does seem to be a possibility and I’d be interested in seeing that happen as a one off match. At the same time though, it could lead to the two being friends and perhaps partners, which could work out as well. There are different options here and that’s a nice feeling to have.

What do you think of the move? How long will McIntyre hold the title? Let us know in the comments below. 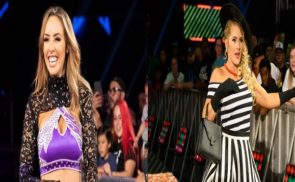