So now the Pure Title Tournament is over and that means we are going to be seeing what else Ring of Honor has. I’m not sure what that is going to mean going forward but at the end of the day, Ring of Honor has done rather well so far since their restart so hopefully they can keep it going as we get a bit more back to normal. Let’s get to it.

Quinn McKay sends us to the end of the Pure Title Tournament finals with Jonathan Gresham winning the title.

Gresham talks about Ring of Honor always trying to be the alternative to professional wrestling. Rush has not been living up to that as World Champion so now the Pure Title is on the same level. This company will be that again with him as the Pure Wrestling Champion.

Quinn previews what we have coming up tonight.

Dak Draper talks about growing up as a success and knowing that he was going to be a star when he young. He was a star in wrestling and football growing up and then got a WWE contract. That wasn’t what he wanted so he traveled around and then won the Top Prospect Tournament here in Ring of Honor and knew he would be a star in the Pure Title Tournament. Ring of Honor made him an alternate though, just like Brian Johnson, who is already jealous of everything Draper has.

Brian Johnson talks about being born in Philadelphia and getting bitten by the wrestling bug. He would buy the toys and the tapes and when he ran out of stuff to watch, he would go to sleep so he could dream about it. There was no football or other sports because he became a heck of a professional wrestler. Then he was given a robe and called Number One, so he had to take over the Ring of Honor Dojo by outworking everyone. Draper showed up and got an easy ride through the Top Prospect Tournament while Johnson failed and failed and failed again. Tonight, Draper better be ready because this isn’t just another match for Johnson.

Pure Rules as they were the alternates in the tournament. The bell rings and Johnson punches him in the face to take over, including sending him outside for a suicide dive. Back in and a top rope clothesline hits Draper for two. Draper punches him in the face but a running crossbody puts both of them on the floor. Johnson comes up favoring his arm and barely beats the count so Draper is right back with a tilt-a-whirl powerslam for two. Draper stays on the arm and we take a break.

Back with Johnson not being able to get a double underhook due to the arm. A Doctor Bomb gives Draper two with Johnson using the rope for the second time. Draper’s running boot only hits corner and Johnson hits a cutter for two. A slingshot rollup gets two more on Johnson but he’s back with a crucifix for the same.

They go into a series of rollups for two each until Johnson hits a clothesline from the apron, with Johnson putting his feet on the ropes….which counts as his third rope break. Johnson’s neckbreaker spun into a faceplant gets two more, with Draper using his first rope break. Back up and Draper hits the Magnum KO (fireman’s carry into a World’s Strongest Slam) for the pin at 11:03.

Brody King talks about being straightedge since he was 16 years old and gravitating towards music. He didn’t start wrestling until he was 27 but since he spent so much time stage diving in music, wrestling dives were easy. This is the first time that he has been on his own and he’s ready to do everything, including going after Rush. He’ll throw everything at you and he isn’t sure which Dalton Castle he’s getting this week. King wants the Castle that was World Champion, not the one who came back from injury.

Dalton Castle talks about his failures in the Pure Title Tournament. Now it’s time to make adjustments and that starts with taking down Brody King. Castle has never been more focused or enraged than he is now. Starting tonight, you get to see how dangerous he really can be.

King powers him up against the rope to block the single leg attempt. That works so well that King does it again and then drives Castle into the corner. Castle slips over the top in the corner and sweeps the leg but King blocks a choke attempt. King charges into a boot to the face so Castle hits some running knees to actually slow King down for a second. That just earns Castle a kick to the chest to slow him down as well and King pounds him down in the corner.

We take a break and come back with King slapping on the neck crank. Some forearms to the chest give King two but Castle fights back up with a knee to the ribs into a DDT. The jump on the back choke strategy doesn’t work but an exploder suplex sends King flying for a change. A quick piledriver plants Castle for the same and it’s takes them both a second to get up.

King wins a forearm exchange and then sends Castle outside for trying the choke again. Castle swings underneath the bottom rope for a hurricanrana, only to get sent over the barricade for his efforts. Back in and Castle catches him on top, setting up the reverse Sling Blade for two. King plants him down for two of his own and snaps off a German suplex. One heck of a clothesline sets up the Gonzo Bomb for the pin at 14:45.

A banged up Castle shakes his hand to end the show. 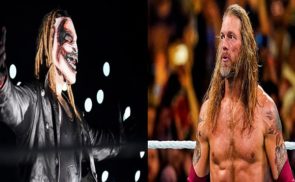