Yeah he’ll do. There are superstars in wrestling and then there is the Rock. There may never have been a bigger star to come out of the world of wrestling and WWE was very sad to see him go. The good thing is that Rock has come back a few times, including having some matches while still being one of the biggest movie stars in the world. That has helped WWE quite a bit and now he might be helping things out again.

We are coming up on WrestleMania 37 and that means it is time to start getting things back up to the high level again. You don’t get to see that happen very often in WWE and this time around it is going to be a special show. The company is trying to have fans back and there is a dream main event which could make things even bigger. Now the other half of it is making a cameo.

The FOX Sports PR Twitter account has announced that The Rock will be a special guest on Friday’s special edition of Talking Smack, taking part in an interview featuring FOX Sports’ Jay Glazer. There is no word on what the Rock will be discussing or if he has any plans to return to WWE at any point in the future. WWE has been hoping for Rock vs. Roman Reigns to headline WrestleMania 37 in the spring. The show will air on FOX Sports 1 at 10pm, following SmackDown on the same network.

Tonight, FRIDAY NIGHT SMACKDOWN shifts to FS1, followed by a special edition of TALKING SMACK featuring conversations between @JayGlazer and @TheRock and @TheWilderThings and @SashaBanksWWE.

He has a bit of a history. Check out the Rock’s time in WWE:

Opinion: I’m not exactly expecting Rock to wrestle at WrestleMania but it is cool to believe in the possibility. At the end of the day, I’m not sure I can believe that Rock is going to be in the ring when there are no or almost no fans. The Rock is the biggest draw that WWE has available, but he isn’t available all the time. Things have to be set up just right and it is going to take something special to make that work. Then again there is the chance that this interview has nothing to do with wrestling, which wouldn’t be that shocking.

What do you think Rock will talk about? Will he wrestle again? Let us know in the comments below. 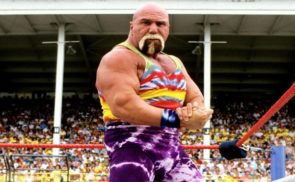