A new Steiner family tradition. There are some famous families in wrestling. Some of these are names that you can remember off the top of your head, including the McMahons, the Harts, the Ortons and the Funks among several others. You can hear some names and just think wrestling, though things can change in the future. One wrestling family is expanding into another story while keeping the options open.

If you are a WCW fan, you probably remember the Steiner Brothers. They were two of the best amateur wrestlers the company had ever seen and a pair of suplex machines. They were as dominant of a tag team as you could find in the 1990s and that is something that you remember many years later. The team worked because they were family, and that family’s sports connection has grown.

Rick Steiner’s son Bronson Rechsteiner, a fullback from Kennesaw State University, has been signed by the Baltimore Ravens as an undrafted free agent. Rechsteiner spoke to Sports Illustrated and mentioned that while he is open to a wrestling career in the future, he is currently focused on continuing his football career. Various wrestling personalities have congratulated Rechsteiner on his signing.

5? years as a program and 5? players have signed with @NFL teams. ?

Rechsteiner has something to live up to. Check out the Steiner Brothers together and on their own:

Opinion: This is a great opportunity for Rechsteiner and hopefully he winds up being a huge success. If nothing else it’s great to see someone getting a chance to live out their dream like this. With an athletic background and wrestling pedigree like his, he can probably find a way into a wrestling company at almost any time. It’s nice to have that as a backup option, but maybe his football career can work out on its own.

Which Steiner Brother did you like better? Would Rechsteiner have a future in wrestling? Let us know in the comments below. 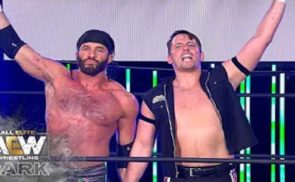