That’s never good to hear. Wrestling is like every other sport. No matter how the wrestlers are going about doing it, they are doing something physical and could get injured in some way. There is a way to wrestle safe, but at the same time you can’t be completely free from the threat of an injury. That can change some booking plans and that seems to be the case with an upcoming big match.

We are less than two weeks away from Money in the Bank and that means the two ladder matches are looming. They are some of the biggest matches of the year and wrestlers go out of their way to try and make them into spectacles. That is the kind of thing that you often see in Money in the Bank and the more athletic the wrestlers can be, the better. Unfortunately, one of the most athletic wrestlers in the company will not be participating this year.

Following this week’s Monday Night Raw, WWE.com has announced that Apollo Crews is out of the men’s Money in the Bank ladder match due to a knee injury. Crews injured his knee during a United States Title match against Andrade, which caused the match to be ended by referee stoppage. After the match was over, Crews was shown with his knee wrapped up and walking away on crutches. There is no word on who, if anyone, will replace Crews.

Crews was busy on Monday. Check out his two matches:

Opinion: I can’t say I’m surprised at this as the injury angle seemed to be the kind of thing designed to keep Crews out of the ring for a bit. I’m not sure what the point of heating Crews up and then pulling him right back down is, but maybe they have a plan for him in the long term. Crews has a lot of potential, but he has to do something at some point. It hasn’t happened yet and I’m not sure how much time he has left.

Will Crews ever win a title? Who will take his place? Let us know in the comments below. 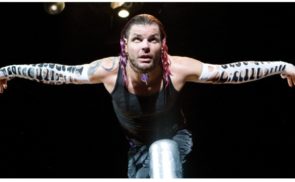