It’s a unique way of getting ready. We are less than two weeks away from Money in the Bank and I think you know what that means. Above all else, the biggest matches on the show will be the namesake ladder matches, which this year will be completely different than usual. This time around the match will take place at Titan Towers with the briefcases on the roof. That’s going to take some special skills to get up there so one of the participants is planning in advance.

Over the last year, Lacey Evans has risen rapidly up the WWE ranks. While she has yet to win a title in WWE, it is clear that she has come a long way in such a short amount of time. With her backstory of being a United States Marine and a mother, it is easy to see why WWE would want to push her. Money in the Bank could be part of that push and Evans is trying to get ready in a different way.

Evans has released a video to her Twitter account, showing a ladder course that she has set up to train for the Money in the Bank ladder match. The video features her climbing several ladders and moving from one to another. Evans talks about using the course to work on her endurance and agility, while also asking fans what else she should add. Money in the Bank takes place on Sunday, May 10 on the WWE Network.

Who does this? Check out Evans’ training methods:

Opinion: This is one of the more unique ways of getting ready for a ladder match than you would usually see. At the end of the day, there is a bit of a science to climbing the ladders and practicing isn’t exactly the worst idea in the world. Maybe it is something that can make the match more interesting, but if nothing else it might get Evans a little attention and that’s never a bad thing.

What do you think of Evans? When will she be Women’s Champion? Let us know in the comments below. 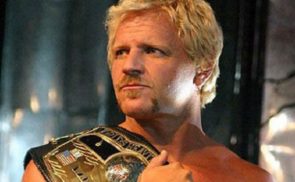