Say that again? Wrestling has a long history of outlandish ideas, including Robocop making an appearance, a walking/dancing turkey and a beer swilling redneck from Texas who fancied beating up his boss.

Sometimes the zaniest ideas can come from the fans themselves. Redditor u/anonymouspotatoskins recently asked, “What’s the worst idea you’ve had lately but too afraid to share?” Commentors weighed in and thousands of fans upvoted their favorite of the “worst” ideas.

There may be no one more intimidating in the wrestling world than Brock Lesnar. The Beast Incarnate has destroyed almost everyone he has come into contact with over the years, mainly as other worldly strong former amateur wrestling champion. That has worked very well, but what if he had another interest?

Lesnar has a reputation of being out to make as much money as possible, and Redditor Tom_Dynamite would like to see that get a sharper focus. He suggests, “Brock becomes a stock market expert and changes his name to Stock Lesnar. His catch phrase is ‘Here comes the gain’ and ‘surplus city bitch.’”

At least you wouldn’t have to worry about the stock market crashing because it would be too busy running away in fear.

One of the most surreal moments you will ever see in wrestling was the night Dude Love, Mankind and Cactus Jack appeared together on Monday Night Raw. You rarely see the idea of multiple personalities coming together like that but Foley made it work. WWE tried something similar with Alexa Bliss last year, but what if things had gone on a lot further than that?

Reddit’s crapusername47 wants to see Alexa Bliss return to WWE television, but this time possessed by Lilly the doll. This would lead to a WrestleMania cinematic match between possessed Bliss and “Glitter Glitz Sparkle Alexa Bliss” from her NXT days, ala Evil Superman vs. Clark Kent from Superman III.

I’m not sure how well it would work, but this is the kind of thing that I could actually see WWE doing. Maybe even doing fairly well.

Charles Montgomery. Cookie Monster. Chick Magnet. Chicago Made. Cookie Master. Chuck Mosley. Crooked Moonsault. These are all suggestions for what the CM in CM Punk might mean, but there is no official answer on what it exactly means. It isn’t something that really matters for the most part, but what if the name was something completely different with a very different meaning?

Punk has long since been seen as the straightedge wrestler who can talk with anyone, but doesn’t really have the most detailed character. PantsyFants has another idea though: Punk could grow a handlebar mustache, start wearing jerkins, a top hat and a monocle. He could change his name to Steam Punk (spelled CtM Punk) and have a robot butler.

I’m not sure if PantsyFants gets the idea of “bad” ideas because this is something I need to see.

Gimmick Shows Can Be Fun!

There have been plenty of gimmick pay per views over the year, where there is usually one major match to focus on, often the show’s namesake. It can make for interesting shows and it can be a lot of fun to see what a company can come up with next. What about an idea that had more rings than ever before, plus some tic tac toe thrown in?

Check out the idea from crushcastles23:

WWE should run a PPV they just call World War E with a backwards 3 in the graphics. The World War E match is a 16 man match with 8 1v1 matches in 8 rings that are connected (think like a tic tac toe board). In the center, there’s a steel cage around another ring and when someone wins their match, they go to the center. It then becomes a team vs team no DQ match in the steel cage.

I’m picturing it, and it’s kind of glorious.

Hasn’t Anyone Told Him?

Wrestling is a unique form of entertainment as it is known to be planned out in advance, but everything is supposed to be treated as absolutely real. It can be rather tricky to make the whole thing work, but when it works well, it works very well. One of the keys is to never give up on the illusion. What if someone went in the opposite direction though?

Very rarely do you see a wrestler intentionally break character on screen. It’s such a rare sight that it could be interesting to see someone do it all the time, as suggested by snek26. The idea would be to have a wrestler who is completely convinced that wrestling is fake.

You could go in more than a few ways with that, but I would hope that he would have a name like Kevin Fabian, or K. Fabe for short.

The mid 1990s are one of the strangest times in the history of WWE. A new group of wrestlers whose characters were all built around their occupation. This included a hockey player named the Goon, a plumber named TL Hopper and a garbageman named Duke “The Dumpster” Droese. There was at least one more though, and now someone wants to see him make a comeback.

NurseBill14 wants to see Hardcore Holly return under his old Sparky Plugg persona in AEW as a tie-in to TNT’s NASCAR coverage. This would lead to Plugg winning the AEW World Title on the infield of the Daytona NASCAR track on a special show called “Race To Remember”. After the title win, Plugg goes on to defeat everyone in AEW.

The fact that NASCAR has not aired on TNT since 2014 is merely a detail.

LA Knight Lives Up To His Name

A wrestler’s name can reveal a lot about them. You have your more famous names with Randy Savage and Hulk Hogan, but there are a few others who are a little more down to earth. There are also names such as the Giant, the Shark, and the Patriot, whose looks matched their names. Some of these characters did not pan out so well, but what if we tried it with an NXT star?

LA Knight is a bit of a strange cat as he is basically the exact same person as he was under the name Eli Drake. Knight has a bit of a different ring to it though, and RealHumanBean89 thinks he should come to the ring in an actual suit of armor. It might sound strange, but Lanny Poffo (better known as the Genius) did the same thing for a series of battle royals back in the 80s.

Wouldn’t you want to be like someone named the Genius?

The Bella Twins are about as controversial of a team as you’ll find in wrestling. Their fans think they are the greatest things ever and their detractors….well they’re detractors. The Bellas were all over WWE TV during their time with the company, but what if one of them tried their hand at another famous look?

T3Sh3 wants to see “Brie Bella coming back and 100% ripping off the Sandman gimmick complete with walking down the arena steps to Enter Sandman.” This would include Sandman’s signature entrance of coming through the crowd to Metallica’s Enter Sandman.

It would be an upgrade over Brie Mode, but I’m not sure how well the signature dance would go. 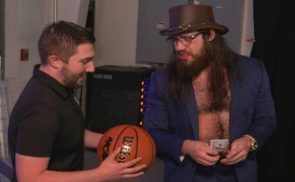 WATCH: Popular Star Gets Major Change To His Look