He’s always a little unusual. There may be no better example of someone grabbing the brass ring in recent years than Otis. Someone who looks like him is not likely to move up the card but Otis has done it with incredible success. Not only has he won his big singles match with Dolph Ziggler at WrestleMania and earned the affection of Mandy Rose, but he has also become Mr. Money in the Bank. So what is he going to do with it?

Money in the Bank is a very unique way of setting up a title match. The briefcase allows a wrestler to instantly receive a title match no matter the circumstances. That is something that has been done several times over the years, but one of the rare things to see is someone announcing a cash-in in advance. It can make for something interesting, and we might be in for that again this time around.

In an interview with Digital Spy before Money in the Bank, Otis announced that he would use his briefcase on a Tag Team Title shot for he and his Heavy Machinery partner Tucker. There are no rules about the briefcase having to be for a singles title, though no one has ever challenged for a Tag Team Title. Otis and Tucker debuted on the main roster as a team, though Tucker has not wrestled since the April 10 SmackDown.

Heavy Machinery has had their moments in WWE. Check out some of their time on the main roster:

Opinion: This would certainly be something different and that is a good thing to do with the briefcase. The idea has been around for fifteen years now and they need to do something fresh for the sake of a little new blood. I’m not sure if Heavy Machinery challenging for the Tag Team Titles is going to be all that great, but it would certainly be different. That’s assuming Otis keeps the briefcase of course.

How do you see the cash-in going? How long will Heavy Machinery remain a team? Let us know in the comments below. 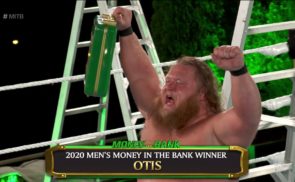