This won’t go well. Wrestling is something that a lot of people aren’t going to like. No matter what they hear, some people are going to have the reactions of “it’s fake”, “they’re actors” or something similar. It is something that has been annoying wrestling fans since wrestling became a thing and it will always be there. That was the case again this week and this time, wrestlers argued back.

On Friday, a video was posted to Twitter, showing comedian Tom Segura and his wife Christina Pazsitzky commenting on wrestling, which they describe as for “f****** r***rds”, stupid, fake and calling wrestling fans “f***** idiots”. Pazsitzky said that she had been to a show and had fun, with Segura replying that the Special Olympics are fun as well, but it was not real or a real competition. Segura went on to say that wrestling is for children and anyone over eleven years old who watches wrestling have “diminished capacity”.

There’s a good bit more here. Check out what Segura and Pazsitzky had to say:

The wrestling world replied, with several WWE wrestlers and producers, as well as some from outside of WWE responding. This included Dolph Ziggler, who asked to discuss wrestling with the two of them. Segura responded, saying that Ziggler could come on over. Abyss also replied, offering to show Segura just how real wrestling is. You can see some of the responds from the wrestling world below:

What a pile of ? https://t.co/PAW7PdprSC

I don’t know if I’m more offended as a wrestler or a comedian.

Aww man, I’m like legit a huge fan of his. And although everyone does has their own opinions, this makes me sad.

Opinion: Here’s the thing: this is either A, a rather uninformed/hateful opinion or B, someone trying to get a rise out of wrestling fans. I’ve heard every insult to wrestling fans imaginable over my entire life as a fan and they just make me roll my eyes. Saying anything remotely negative about the Special Olympics, or comparing it to something you have deemed fake, is just hateful to people who have done nothing wrong and don’t deserve anything similar (which could apply to wrestling fans in this case as well but that’s a different story). The Special Olympics part was too far and hopefully that gets the attention.

What do you say to people who call wrestling fake? Who is your favorite comedy wrestler? Let us know in the comments below. 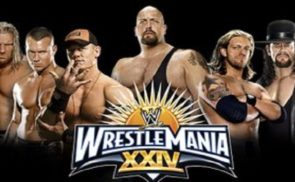