A precursor to the throne. WWE has posted a new video to its YouTube channel in which they show the full Men’s Money in the Bank Ladder Match from 2017. The match featured Baron Corbin, Kevin Owens, AJ Styles, Sami Zayn, Dolph Ziggler, and Shinsuke Nakamura.

There was Owens annihilating everyone in sight with a ladder … until Zayn tossed him so emphatically onto said ladder that it crumpled. There was Zayn battling through Ziggler to get within arm’s length of the contract … until Corbin smashed him headfirst into the ladder he was trying to summit. There was Ziggler literally climbing over Corbin to make a play for the briefcase, Zig Zagging him off the rungs and fighting his way through Styles to scale the steel … until Zayn sunset-flipped over him and powerbombed him down to the canvas.

There was Zayn again, suplexing Owens onto the apron, only to eat a Phenomenal Forearm that toppled both him and the ladder he was halfway up. There was Zayn … again, Helluva Kicking Corbin, only to eat a boot to the groin from Owens. There was Styles, finally grabbing control of the briefcase handle … only for Ziggler to kick the ladder out from under him and send him falling to the mat. There was Corbin, taking advantage of the decimated field to climb the ladder … until Shinsuke Nakamura stunningly returned to the match with payback on his mind.

With the WWE Universe chanting his theme song, The King of Strong Style administered kicks and knees to everyone who wandered into his path, culminating with Kinshasas to Ziggler, Zayn and Owens. When Nakamura found himself grabbing hold of the ladder at the same time as Styles, they simultaneously moved it out of the way and hammered each other with forearms, with AJ claiming the upper hand after hitting one of the Phenomenal variety.

And then, finally, there were the two world-traveled warriors scaling the ladder to trade punches with the briefcase hanging just out of reach … until Baron Corbin shoved them both off the ladder and grabbed the contract for himself.

I wonder how that cash-in worked out for him? 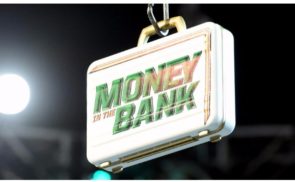 Backstage News on Money In The Bank 2020: Storylines, Taped Money in the Bank Match, More

Two Matches Added To Money In The Bank