One More For The Ranks. WWE Signs Independent Talent To NXT Contract.

You have to keep the cupboards full. We’re coming up on another hour of WWE TV every single week with NXT expanding to two hours every single Wednesday. With so much more television around, the company is going to have to get some more talent to come in and full in the space. That means keeping the benches full as well, so WWE has a new signing to take up a spot.

According to Squared Circle Sirens, WWE has signed Indi Hartwell to a developmental deal with NXT. Hartwell is a 22 year old Australian and has been wrestling in Australia and the American independent scene since 2016, including a stint in SHIMMER. At the moment, there is no word on when she will be starting with WWE or how many independent dates she has left to fulfill.

You might want to see how Hartwell can do against the best in the world. Check out this match from WrestleCircus: 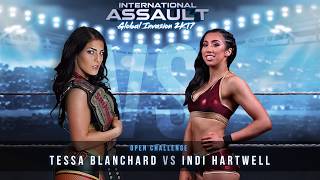 Opinion: I’ve seen Hartwell before and I can see why WWE would be interested in bringing her in. She has a lot of natural talent and could become a bigger star in due time. She hasn’t been around very long and is still very young, meaning that WWE could get her into their ranks before someone else could snatch her up. That makes a lot of sense and maybe they can have a new star on their hands.

Do you like this signing? Who else should WWE sign? Let us know in the comments below.

RUMOR: That Doesn’t Sound Like WWE. Ronda Rousey Up For A Big Acting Role In The Marvel Cinematic Universe.

(VIDEO): There’s More To It Than That. Go Behind The Scenes Of Becky Lynch’s SportsCenter Commercials (This Is Pretty Cool).