We’re less than two weeks away from Fastlane and the big story coming out of last wee was Bobby Lashley FINALLY winning the WWE Title. I’m not sure how long he is going to hold the thing but it is great to see it finally happen. They have some heavy pay per view building to do so let’s get to it.

We open with a long recap of Bobby Lashley vs. the Miz (both times) last week.

Bobby Lashley, with the rest of the Hurt Business, talks about how much he went through to get here and knows it was worth it. The Almighty Era has begun.

Here is the Miz, with John Morrison, for his rematch but first, he talks about how he was treated unfairly. Miz has done everything he can for this company and never takes vacations or misses time due to injury. Shane McMahon has it in for him though and made him defend the title last week despite his stomach cramps. Miz: “CRAMPS!” There was a title match though and Miz retained via countout. Like it or not, that was a title defense. But then McMahon said we’ll do it again in a lumberjack match. It was not fair and tonight, Miz is taking the title back because he is the Miz and he is AWESOME.

Lashley, with MVP is defending and John Morrison is here with Miz. We get the Big Match Intros and Miz drops straight to the floor. Miz snaps Lashley’s throat across the top rope but Lashley picks him up for a delayed vertical suplex. A missed charge sends Lashley shoulder first into the post and then Miz does it again for a bonus.

We take a break and come back with Lashley throwing Miz down with a suplex. Miz gets in a big boot though and a low bridge puts Lashley on the floor again. A missed dropkick through the ropes lets Lashley post him hard to knock Miz silly. Back in and the big spinebuster sets up the Hurt Lock to retain the title at 9:05.

Wrestlemania tickets go on sale a week from tomorrow.

Drew McIntyre says he is the only challenger for the title and rants about how Miz got a title shot before he did. McIntyre knows Lashley is big and dangerous….but here’s Sheamus to jump him from behind. Sheamus shouts that this isn’t over after twenty years of being in McIntyre’s shadow. With Sheamus gone, a rather angry McIntyre gets up and starts throwing things.

We look back at Braun Strowman’s issues with Shane McMahon and Adam Pearce last week.

R-Truth comes up to Strowman and asks for his help with Bugs Bunny. See, Bunny has gone to the Monstars and he needs Strowman’s help to get him back. First, Truth apologizes for various things, including digging a tunnel underneath the Thunder Dome and stealing his dentist’s goldfish. Strowman doesn’t have time for this and wants an apology from Shane McMahon. Truth says this conversation never happened and clicks a pen in front of Strowman’s face ala Men In Black.

Here’s Braun Strowman to ask why Shane McMahon is doing all these things. He wants an apology because he wants some respect from Shane. Strowman demands Shane come out here so cue Shane, who gets in the ring, says “I’m sorry”, turns and leaves. Shane pauses on the stage, seems to think about saying something, and then leaves without saying anything.

No DQ so Drew jumps Sheamus at the entrance. They brawl to the ring for the opening bell with Drew getting in an elbow to the face but getting knocked out of the air. Drew catches Sheamus on top though and they head outside, with Sheamus going into the steps. He is right back with a hard clothesline but the kendo stick shot only hits post. Sheamus is sent over the barricade and then back inside, with Drew bringing the kendo stick with him. A low blow on the way back in lets Sheamus grab the stick for a few shots.

The Regal Roll connects but Drew snaps off some belly to belly suplexes. A Russian legsweep with the kendo stick gives Drew two and they head outside again. Sheamus posts him and hits a spinebuster onto the announcers’ table and we take a break. Back with Sheamus hitting a spinebuster but not being able to get the Cloverleaf. Instead Sheamus goes up top but gets crotched, allowing McIntyre to get two off a top rope superplex. A chair is brought in but Drew blocks a shot and hits the Future Shock onto said chair for a near fall.

The Claymore is countered as Sheamus throws the chair at McIntyre’s head, setting up a jumping knee for two. The chair is wedged into the corner but McIntyre sends him head first into it instead. Now the Claymore connects but it knocks Sheamus outside. McIntyre muscles him back in but the Brogue Kick knocks him off the apron. They both pick up steps on the floor and ram them together, which knocks both of them down in a heap. Sheamus is out and the referee stops the match at 19:24, presumably for a no contest.

Post match medics come down as neither of them can stand.

Long video on Randy Orton vs. Alexa Bliss since Orton set the Fiend on fire at TLC.

AJ Styles is asked about Wrestlemania but would rather talk about Randy Orton and Alexa Bliss. The Fiend is tearing Orton down bit by bit with voodoo magic. Cue Orton to ask if AJ thinks this is funny. AJ doesn’t, but he does find this weak. A match is set for later.

Preview of next week’s Tag Team Title match between New Day and the Hurt Business. Shelton powers him out to the floor to start and then knocks Woods down inside. The chinlock goes on for a bit before Shelton sends him into the corner. That means a running knee to the face for two but Woods fights up and strikes away. Shelton knocks him back and yells at Kofi Kingston, with the distraction letting Woods grab a small package for the pin at 3:44.

Riddle needs a place to put his scooter but agrees to let New Day (coming back through the curtain) hold onto it for him.

Non-title and Mustafa Ali is here with Slapjack. Riddle starts fast with a suplex into the Broton but an Ali distraction lets Slapjack send Riddle into the apron twice in a row. Back in and a dropkick gives Slapjack two, followed by a Falcon Arrow for the same. Slapjack goes up but he dives into a powerbomb off the top. The Final Flash gives Riddle a delayed two so he hits it again, setting up the Bro Derek for the pin at 3:54.

We look back at the Braun Strowman/Shane McMahon segment from earlier.

Shane tells Adam Pearce to have Strowman meet him in the ring.

Post break Shane is in the ring and here is Strowman to meet him. Shane’s mic doesn’t work so he goes to the floor to get another one and then heads up the ramp. Shane talks about how last week was about having fun and Strowman needs to do the same. It’s ok to have fun at other people’s expense, though Shane can tell Strowman does not agree. Shane says there is something they have to get done….but he isn’t sure he can talk about this.

Strowman says get on with it so Shane says they need to come to an understanding. Shane starts coming back towards the ring but then backs up as Strowman asks if Shane is trying to make him look stupid. That isn’t the case because Shane doesn’t like the word stupid. Instead, Shane lists off some cliches about being stupid, but Shane would never call him stupid, would he B-b-b-b-Braun? That’s enough for Strowman as the chase is on, with Shane running into a waiting car. The car pulls away and Strowman leaves, with Shane popping back up and saying Strowman is so stupid.

Jax and Baszler are defending…..and Reginald is here with them. Jax says he is down on his luck so she has brought him here for the match. Jax: “Isn’t he cute?” Shayna drives Lana into the corner to start but Lana is back with a bulldog, allowing the tag to Naomi. A double Russian legsweep drops Baszler for two and Naomi hits a corkscrew dive onto both champs.

We take a break and come back with Shayna cranking on Lana’s neck. That is broken up and the hot tag brings in Naomi to clean house. A headscissors faceplant gives Naomi two on Jax and everything breaks down. Reginald offers a distraction so Lana kicks him down, only to turn into a powerbomb from Jax for the pin at 7:41.

Randy Orton laughs off the idea that people are worried about him and promises an RKO to AJ Styles.

Mandy Rose and Dana Brooke want a title shot at Wrestlemania but aren’t going to announce it like Charlotte did. Cue Charlotte to say they need to prove themselves to her. So go do something about it.

AJ Styles thinks Randy Orton is crazy so tonight it’s time to smack some sense into him.

We take a long look at Miz vs. Bobby Lashley from earlier.

Omos is here with Styles. Orton hammers away to start and the threat of an RKO sends AJ bailing to the floor. Back in and AJ hammers away so they go outside again, with Orton dropping him onto the announcers’ table. A staredown with Omos lets AJ knock Orton off of the apron and there’s the slingshot forearm to the floor as we take a break.

Back with AJ working on the knee and then striking away in the corner. Orton gets in a few shots of his own though and a spinning clothesline drops AJ. They get back up and Orton catches him on top before also blocking the Phenomenal Forearm. The hanging DDT is countered into the Calf Crusher but Orton escapes and hits the hanging DDT.

Omos pulls AJ away from the RKO….and here’s Alexa Bliss on the screen. She plays her jack in the box but tells it not yet. Instead she lights a match and blows it out, which makes fire come up from three of the four ring posts. Orton coughs up the black goo and turns into the Phenomenal Forearm for the pin at 15:04. 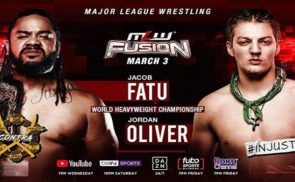