There’s your big match. We are less than a month away from Backlash and that means things are going to start picking up around WWE. With the pay per view showing up sooner rather than later, the card needs to start coming together. WWE has a lot of work to do in the next few weeks, but one of the bigger matches was set up earlier this week and now it is set in stone.

The big closing segment of this week’s Monday Night Raw saw WWE Champion Drew McIntyre defeat SmackDown’s King Corbin in a non-title match. Before the match started, Bobby Lashley and MVP came to the stage to watch the match, with MVP saying that Lashley wanted a title shot against McIntyre. The champ did not seem to object, and now we know where things are going.

WWE.com has officially confirmed that McIntyre will defend his title against Lashley at Backlash. The match will be Lashley’s first shot at the title since July 2007. This will be their first meeting in WWE, though they wrestled multiple times in Impact Wrestling, with Lashley taking the title from McIntyre at Slammiversary 2016. Backlash takes place on June 14.

They’re both ready. Check out the two of them in action last night:

Opinion: This is the most logical match that they have at the moment as Lashley has been on fire lately and that should put him near the top of the heap for a title shot. What makes this better is that there wasn’t some personal issue that set it up. Lashley has won a bunch of matches and earned a title shot. Personal issues are fine, but sometimes it makes sense to go with something more direct.

Are you interested in the match? Who leaves as champion? Let us know in the comments below. 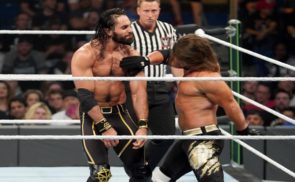