As strange as this is going to be, it might be an improvement for what we usually get on this show. Given the amount of people they are allowed to have in the building, it would surprise me if they brought some of the normal low level wrestlers that frequent this show. Then again Ricochet was on here last week so it could go in a bunch of ways. Let’s get to it.

Ruff is from Evolve and looks a bit terrified. Black sits down in the middle of the ring to start, with Mickie telling Ruff to kick him in the face. That doesn’t happen though as Black Mass finishes Ruff at 1:13.

Six years ago, Wyatt lost and got lazy but blamed Cena instead. Cena never gives up and some people say it’s because he wins a lot. That’s true, but what about all of his big losses to Miz, Rob Van Dam, CM Punk, The Rock, Brock Lesnar and others? It’s because Cena always keeps going and rising up again without blaming everyone else. So how does he respond to Wyatt? Give him a chance and he’ll give the Fiend an Attitude Adjustment.

After we look back to two weeks ago with the start of Cena’s promo about not wrestling at Wrestlemania, Cena says that he’s facing Bray because he wants to invest in the future. People like Drew McIntyre, Tommaso Ciampa, Matt Riddle and Velveteen Dream deserve the chance instead of giving Bray his fifth or sixth chance. Wyatt pops up in an empty seat and says Cena can say this while having everything. A lot of people want to imagine what it’s like to be Cena for one day.

In reality, Cena is the sick one because no one believes that it’s about the future. Cena will smash and bury everyone as long as he gets the spotlight. He craves it like an addict and even fiends for it. Six years ago, Cena took something from Bray and he’s thought about it a lot since. He wanted to crush his brain for five seconds of peace from the voices but then he started listening. Those voices became a fun house and he was put back together as the Fiend. At Wrestlemania, it’s going to be a slaughter. Let him in.

Video on Undertaker vs. AJ Styles.

Lawler brings out Undertaker for the contract signing and Undertaker power walks to the ring, where he turns the table over in anger. Post break, Undertaker is still in the ring and waits on AJ, whose music plays a few times but he doesn’t show up. AJ and the OC show up on screen with the contract, which was never in the ring. He’s the one who challenged Undertaker last week because Undertaker is the one who won’t just go away. You don’t see Michael Jordan or Brett Favre showing up and taking up a spot, but you know Undertaker will be at Wrestlemania.

It’s old Money Michelle’s fault because she makes his dust off the hat and coat so she can have things. Undertaker needs to let it go and stop sticking his nose in OC business. AJ is willing to pay for Undertaker’s assisted living after Wrestlemania because Undertaker will be resting in peace. Styles signs the contract and sends Gallows and Anderson to take the contract to him.

That’s a big negative but AJ finally talks them into it. They come into the arena and lay the contract down, but the gong hits and the lights go off. Back up and he’s behind them, meaning the beatdown is on. With Anderson and Gallows down, Undertaker signs the contract and stuffs it in Anderson’s mouth as a disgusted AJ looks on from the screen.

You made him mad:

Montez Ford is here with Dawkins and Akam is out with Murphy. Dawkins takes him into the corner for the early clean break so Dawkins runs the ropes. That earns him a trip to the floor but he’s right back in for a shot to the face. Murphy sends him into the post though and we take a break.

Back with stereo right hands putting both of them down, sending Ford into a frenzy on the floor. They seem to work as Dawkins hits the spinning corner splash and a regular version gets two. A quick Akam distraction lets Murphy hit a top rope Meteora for two, meaning Ford superkicks Akam. Murphy sends Ford into the barricade but walks into a Sky High for the pin at 8:16.

The announcers are in the ring to welcome us to the show and hype up everything happening tonight. After a clip of AJ Styles talking about Undertaker and Michelle McCool last week, here’s Edge to interrupt. He shows us a package of everything that has happened with Randy Orton over the last few months, which is quite the emotional ordeal. Back in the arena, Edge talks about the long road between the two of them over the last twenty one years.

Edge knew that their careers would intertwine and that’s what they did, as they fought over the Intercontinental Title and then forming Rated RKO. They both owe Mick Foley for pushing them to this new level but Edge took a lesson from Foley that Orton never did: grit. After all the surgeries and time off, Edge fought back and got here again. He didn’t have his dad pushing him this far because he was raised by a single mother who broke her back to help get him here.

Then Beth Phoenix came out to give a medical update on him, but Orton took her out with an RKO. What Orton didn’t know was that Beth was here to announce Edge’s retirement. The beatings and injuries were too much, but Orton dragged Beth out of the hole. At Wrestlemania, if Orton has the guts, the match is on in a Last Man Standing match.

Would you tell him no:

From Raw one more time.

Here’s Steve Austin (announced as the greatest of all time, which is now applied to both himself and John Cena) for a chat, complete with cans of his IPA. Austin says if you want to know what 3:16 Day is all about, give him a h*** yeah. We cut to a shot of the empty seats and Austin asks for it again. Byron Saxton gives him a VERY enthusiastic H*** YEAH and Austin reads some jokes off a card, saying like 3:16 Day means flipping people off and…..a bunch of gibberish because Austin has the card upside down. As he reads these, Byron holds up big cards with a rating for each joke.

Austin gets a 5 for his last joke before saying Byron has been so helpful during this entire time. Therefore, he can come down to ringside and celebrate 3:16 Day with Austin. Byron comes down and drinks before the Stunner means beer can be consumed. Cue Becky Lynch with a cooler but Austin brings up her Stunning her the last time they were in a ring together. They drink a lot (with one more Stunner to Saxton) to end the show.

Remember to follow me on Twitter @kbreviews and pick up the paperback edition of KB’s Complete 2004 Monday Night Raw Reviews (also available as an e-book) from Amazon. Check out the information here:

Update: How WWE Will Tape Several Shows Early, Including WrestleMania 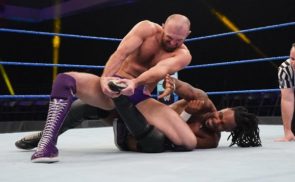